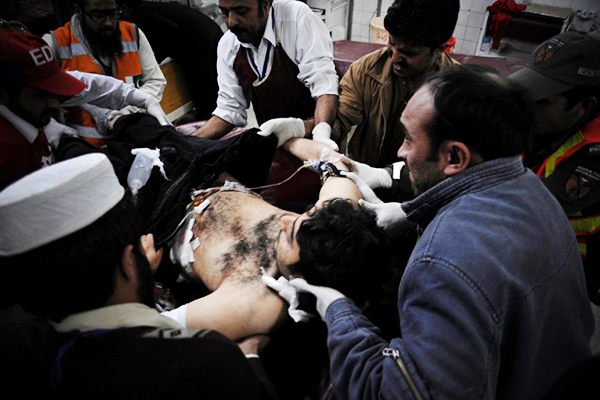 Hangu residents were treated in Peshawar after a mosque bombing killed 21 on Feb. 1. A. Majeed—AFP

A suicide bomber killed at least 12 people and wounded 40 others, including a candidate for the Khyber-Pakhtunkhwa provincial assembly, in Hangu on Tuesday.

This was the second attack in two days targeting candidates from the Jamiat Ulema-e-Islam (Fazl), the rightwing party which was for a period part of the outgoing coalition federal government led by the Pakistan Peoples Party.

“He blew himself up near the vehicle of Sayed Janan,” said Abdul Hameed Khan, a senior government official in Hangu referring to the suicide bomber. Janan is the JUIF’s candidate for the provincial assembly from the PK-43 constituency. “[Janan] was injured but he is safe.” Officials expect the death toll from the afternoon bombing to rise.

“I was on my election campaign and coming to my vehicle when the bomber blew himself up,” said Janan. “I received some injuries but survived. Two of my guards were seriously wounded.” Janan said his head and shoulder have been injured from the attack.

Yesterday, the Taliban targeted two other JUIF candidates in the federally-administered Kurram tribal agency, killing at least 23. The Pakistani Taliban said their intended target was candidate Munir Orakzai, not the JUIF specifically.

The attacks are surprising because the Taliban had in recent weeks shown faith in JUIF chief Maulana Fazlur Rehman by publicly asking him to become one of the mediators in potential truce talks between the militant group and the government. Rehman has been a target himself. He survived two back-to-back assassination attempts in March 2011.

The Taliban have called democracy a “system of infidels” and warned religio-political parties against using Islam to canvass for votes. “Stop using religious anthems during the election campaign and corner and public meetings,” the Mardan chapter of the Pakistani Taliban recently said. They have vowed to continue attacks on the JUIF’s former partners in power: the PPP, the Awami National Party, and the Muttahida Qaumi Movement.

Also on Tuesday a roadside bombing killed at least five people as the brother of a provincial assembly candidate for the PPP went door to door to canvass for votes in Dir, police said. “It was a remote-controlled bomb, it went off when the brother of candidate Zamin Khan was campaigning,” said police officer Mehtab Khan. “One vehicle has been totally destroyed. I can see three bodies. It is not immediately clear how many people were in the vehicle.”

The Tuesday bombings raise to 109 the number of people killed in attacks on politicians and political parties since April 11, according to an AFP tally. Elections have been postponed in three constituencies—one in Balochistan, two in Sindh—where candidates have been killed.