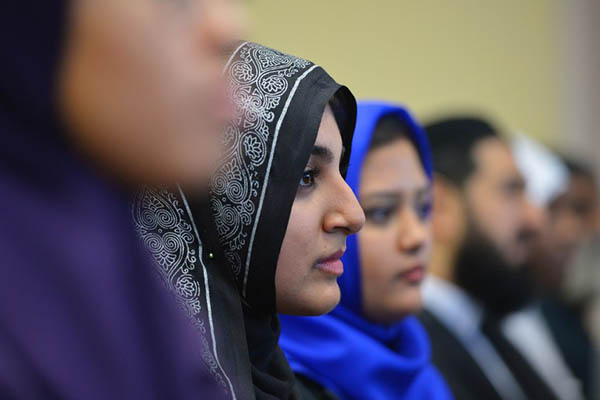 Critics of Scandinavian mosque say men should be allowed to attend prayers alongside women.

Scandinavia’s first female-led mosque has held its first Friday prayers in Copenhagen, a milestone for an “Islamic feminist” project whose founder hopes will help combat Islamophobia. But there was also criticism that the project did not go far enough in promoting women’s rights.

The khutba was held in the Mariam Mosque in an apartment in a busy Copenhagen shopping street six months after it opened. Temperatures soared inside on a balmy summer’s day as more than 60 women, around half of them Muslim, came to hear Danish-born imam Saliha Marie Fetteh.

Friday’s event was opened by the mosque’s founder Sherin Khankan, who is herself becoming an imam. She said that she had originally wanted to open a mosque where female imams could preach on Fridays to a mixed crowd, but later changed her mind.

“It turned out that a majority of the community wanted a Friday prayer for women only,” said Khankan, born in Denmark to a Syrian father and a Finnish mother. “Today I am very happy about the decision because when you try to create change it’s very important that you do it wisely and slowly,” she added.

The decision to bar men from the prayers drew criticism from Syria-born Danish lawmaker Naser Khader, who told broadcaster TV 2 that it was not “good enough” in a country like Denmark—known for having a high level of gender equality—to shy away from letting women preach to a mixed crowd.

Five Islamic marriage ceremonies have been conducted at the mosque, which has issued its own marriage contract. Under the agreement women have the right to divorce, polygamy is prohibited, men and women have equal rights to their children in case of a divorce, and the marriage is annulled in the event of mental or physical violence.

The mosque’s aim was also to fight Islamophobia by showing Muslim women could “take the lead,” Khankan said.

Similar projects exist in a handful of other countries, including in the U.S. where “The Women’s Mosque of America” opened in Los Angeles last year.