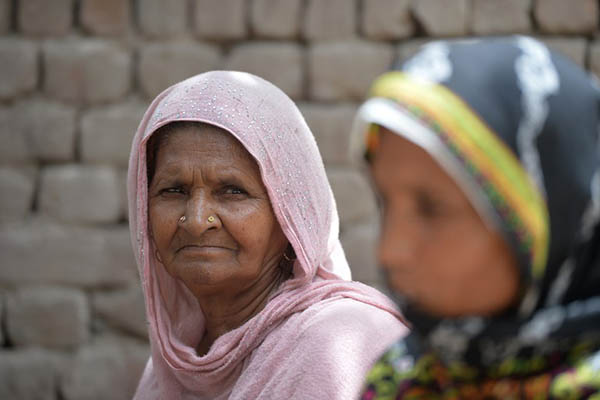 Men banned women from voting in the village of Mohri Pur sometime around 1947, and they have obeyed ever since—until this year, when changes to Pakistan’s election laws and women’s attitudes could shift the dynamic.

At least, that is the hope of many women meeting beneath a Jambolan tree in the village some 60 kilometers from Multan, its shade protecting them from the blazing sun. Whether the men watching angrily as the women speak to AFP reporters will allow them to follow through when the nation goes to the polls on July 25 is another question.

“They perhaps think that women are stupid… or there is an issue of honor for them,” says 31-year-old Nazia Tabbasum. Village elders banned women from voting decades ago, claiming that visiting a public polling station would “dishonor” them.

So-called “honor” describes a patriarchal code across South Asia that often seeks to justify the murder and oppression of women who defy conservative traditions by acts such as choosing their own husband, or working outside the home. “I don’t know where their honor goes to sleep while they lie down at home… as their women work in the fields,” Tabbasum adds, scathingly.

But the Election Commission of Pakistan (ECP) has declared that at least 10 percent of voters in each constituency must be women, otherwise its results will be voided. Nearly 20 million new voters have been registered in the rapidly growing country, including 9.13 million women, the commission says.

It is another step in women’s long battle for rights in Pakistan, a patriarchal country of some 207 million people—though it does little to address the gender imbalance of the 2013 elections, in which male registered voters outnumbered female by some 11 million.

The shift also sets the stage for a stand-off in conservative rural areas, like Mohri Pur.

“The main reason is that these are the areas where women are not allowed to even come out of the house,” says Farzana Bari, a gender expert and rights activist. The ECP’s rule change should improve things—though Bari warned that within each constituency there could yet be pockets where women are prevented from voting.

There is plenty of precedent: in 2015 men stopped women from voting in a local poll in Lower Dir, in the northwest. The ECP promptly cancelled the result.

In 2013 a court ordered the arrest of male elders in two other northwestern districts over banning female votes in the previous general elections.

In Mohri Pur, women do work outside the home and some receive education, yet the vote ban holds. Many of the younger women under the Jambolan tree are eager to exercise their rights—but not all.

Widow Nazeeran Mai, 60, says it is not “custom” for women to vote. “[T]here is no one to stop me, but still I don’t vote because nobody else does,” she says.

Others fear violent reprisals. “If they go to vote alone, there will be violence and unrest, the men will abuse and beat them, so it’s better not to go,” explains 22-year-old Shumaila Majeed—though she remained determined to get as many women to the polls “as possible.”

Even Mohri Pur’s lone female councilor Irshad Bibi—elected under laws stipulating at least one woman on every village council—has never voted. When asked why, she calls on her husband to speak for her. “Our elders had set up this custom… We stand by this today,” the husband, Zafar Iqbal, tells AFP.

“In any civilized democracy, half the population ought not be disenfranchised,” says newspaper columnist Hajrah Mumtaz. But local politicians say they are helpless.

“I can’t break their tradition… the people of this village have to decide when they will allow women to vote,” says Raza Hayat Hiraj from the Pakistan Tehreek-e-Insaf party.

Bismillah Noor, a member of the district council who arranged the meeting under the Jambolan tree, says the men are stubborn. “I’ve been trying since 2001 but nobody listens to me,” she says. “In 2005, men told me their women don’t want to vote so I should not force them.” Another attempt in 2013 also failed.

The determination Noor hears from the village women now gives her a glimmer of hope—but progress is fragile.

In 2015, one woman, Fouzia Talib, became the only one in Mohri Pur to vote in local elections. She was ostracized. Now, she is unsure if voting on July 25 for politicians she believes will do little for the area is worth the backlash.