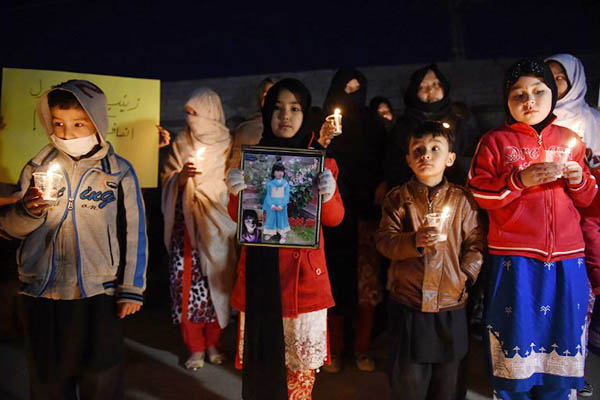 The horrific case of young Zainab Ansari has apparently shaken Pakistani society to its core. Despite the social apathy that we often bemoan, the horrendous nature of the crime against Zainab is hard to come to terms with because we can finally put a face to a victim of brutal ‘child abuse’ and see our own children or siblings in that face. No wonder all forms of media, including Facebook, Twitter and their likes, are ablaze with outpourings of sympathy, disgust and anger. The cries for public hanging and immediate justice without any trial are the most cogent expression of our desperation to somehow quench our thirst for revenge. Our collective guilt over having failed Zainab has shaken our conscience. The Supreme Court has taken suo motu notice of the incident and the Punjab chief minister is personally monitoring the case.

In our agony, it is impossible for most of us to take our eyes away from this little speck called Zainab on the vast canvas of child abuse that perhaps all of us are guilty of, including the state. For sexual abuse and murder, however horrific, is unfortunately only one of the myriad ways, however extreme, in which we all commit the larger crime of child abuse in our everyday lives.

It is perhaps easy for us to think that sexual abuse is the only form of abuse that has the potential of leaving a child permanently scarred. It is extreme, has a visible face, a humanist as well as a societal consensus against it and brings to light the darkest of the evil that mankind is inherently capable of. Yet it is only one way in which we are failing our children and have been failing them for 70 years.

In fact, our failure spans generations that have been deprived of their basic rights and the opportunity to live up to their potential. One only has to look around to see the faces of countless children scarred by the apathy of the society as well as the state. The story of Zainab’s Pakistan is the story of perpetual abuse of the majority of its children.

Abuse has often been defined as an act which is morally wrong, cruel or amounts to maltreatment. In the case of a child, it can simply mean depriving children of their fundamental rights that, in any civilized society, they are entitled to the moment they are born. Let us consider them one by one and compare our track record against our obligations to deliver them to our children under any and all circumstances.

In any analyses of child abuse, one has to inevitably start from the most basic of a child’s needs, which, if not fulfilled, would hinder their mental, physical, moral and psychological development. The Convention on the Rights of the Child, which Pakistan ratified on 12.11.1990, provides in Article 6 that “all children have a right to life, and to survive and develop physically, mentally, spiritually, morally, psychologically and socially to their full potential.”

No child can develop to his/her full potential unless and until their basic needs i.e. a right to health, nutrition, clean water and education are satisfied. It is in this context that the Constitution of Pakistan in Article 25(3) provides that the State has to make special provisions for the protection of women and children. In the recently introduced Article 25A, the State has been obligated to provide free compulsory education to all children between the ages of 5 and 16. In the chapter of Principles of Policy, under Article 38(d), the State should provide basic necessities of life such as food, clothing, housing, education and medical relief. The State of Pakistan, as would be apparent from the following facts, has obviously and miserably failed to adhere to its international and constitutional obligations. Consequently, the vast majority of the children of Pakistan have been deprived of their potential and an environment to advance. There cannot be any greater abuse than denying children these fundamental rights which, in the long run, rob them of even the possibility of living to their potential.

UNICEF’s annual report for 2016 notes that studies have found 44% of Pakistani children have stunted growth and 22% are severely stunted, due to being chronically undernourished, which has lifelong impacts on their health, achievement and well-being. This is the third highest rate in the world. Directly or indirectly, malnutrition contributes to almost 35% of all under-5 deaths in the country. Furthermore, about 58% of Pakistanis are food insecure according to the National Nutritional Survey 2011.

Pakistan fares even worse in the area of health. It has amongst the highest rates of child mortality—89 of every 1,000 born alive die before reaching the age of five. Only 52% of deliveries are accompanied by a skilled work attendant. According to the World Health Organization, tens of thousands of children under the age of 5 die due to diarrhoea annually. At least 50% of children have little or no access to quality health services.

One of the main culprits of child deaths and disease is lack of clean drinking water. More than 80% of children lack access to safe drinking water and almost 90% of the country’s water resources do not meet the water quality standards for human consumption.

UNICEF reports that over 22 million children aged 5 to 16 are out of school, including 5,000,000 of primary school age. Girls from poorer rural families receive an average of one year’s education throughout their lives. Education is intrinsically linked with physical and extra-curricular activities as well, which obviously are improbable in schools which do not even have basic facilities. As per Alif Ailaan’s “The State of Education in Pakistan” report, one third of schools in the country have no water or basic sanitation or toilets. Only half of government schools have usable toilets. 77% of out-of-school Pakistani children have never been to school and, of those who have, 23% drop out. Only 51% of women in Pakistan have ever attended school, and amongst the rural sector this figure is below 40%. Given the current rate of progress, it would not be before 2076 that every Pakistani child is in school. The tragedy in the education sector does not end here. On the one hand, as a State and society, we continue to deprive children of their right to education, and on the other, due to the private school system, the gap between the opportunities for the more affluent and the deprived has reached critical mass.

The most obvious fact emerging from this bleak picture is that we as a society are not alarmed by these facts. Rarely do these realities figure in our daily discourse. Rarely do we look at our house help and see children, instead of servants. We continue to bemoan our population increase, without actually addressing the problems that arise for the children born in this country through no choice of their own. The State of Pakistan, and we as a society continue to fail our children, and even when we recognise our failure, we demand retribution, rather than restitution. In Zainab’s Pakistan, Zainab and her like, are destined to remain statistics, and statistics alone, if our society and our State does not wake up to its responsibilities and obligations, both under law (our international commitments and the Constitution) and under conscience. A demand and hope for a public hanging may address the shock to our conscience that Zainab’s tragedy has provided, but it will not address any of the abuse we subject our faceless children to on a daily basis.

Ahmad is an advocate of the Supreme Court of Pakistan and co-founder of Imkaan Welfare Organization. He can be reached at mahmood@mintoandmirza.com.pk