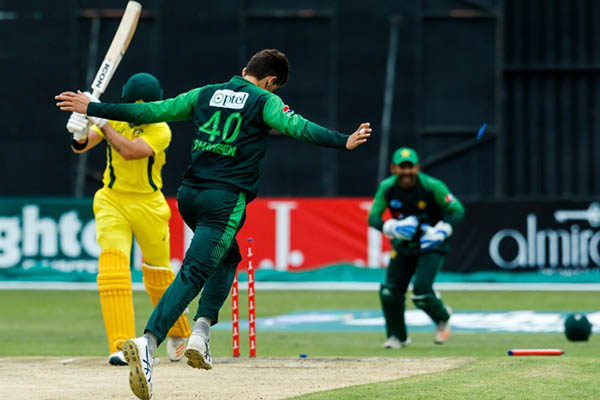 Pakistan’s opener Fakhar Zaman blazed his way to a career-best 73 as his side completed a clinical 45-run victory over Australia on Thursday in the Twenty20 tri-series in Zimbabwe.

Zaman’s knock helped his side race to 194 for 7 before left-arm seamer Shaheen Afridi starred with three wickets as Pakistan’s bowlers held Australia to 149 for 7 in a match which was effectively a dress rehearsal for Sunday’s final.

Australian seamer Andrew Tye admitted his disappointment after the loss. “We were just well off the mark today in all aspects,” said Tye. “With the bat, the ball and in the field we were a bit sloppy. We definitely expect more from ourselves.”

Pakistan had lost Haris Sohail for a golden duck after being put in to bat on a chilly midwinter morning in Harare, but Zaman and Hussain Talat wrested back control back with a rapid 72-run stand.

Talat cracked three fours and a six before playing one shot too many to be bowled by Glenn Maxwell’s offspin.

Zaman continued to middle his aggressive strokes and went to a 33-ball 50, his third for Pakistan in this format, with a slog sweep for six, while another big hit off Tye’s seamers took the batsman past his previous best of 61.

An edged four took Pakistan beyond 130, and Zaman into the 70s, in the 15th over, but he pulled the next ball he faced straight to Maxwell on the edge of the circle at midwicket. The quick dismissal of captain Sarfraz Ahmed, edging a Tye legcutter into the hands of wicketkeeper Alex Carey, put a further dent in Pakistan’s batting, but the experienced Shoaib Malik ensured that the runs kept flowing.

He hit 15 off the 17th over, bowled by Marcus Stoinis, boosting Pakistan beyond 150. After he fell, Asif Ali struck three fours and two sixes in an unbeaten 37 to keep the pressure on Australia right to the end of the innings. “We didn’t execute our plans very well,” said Tye. “We probably set our fields a bit wrong at times as well. They knew what we were going to come out and do and they attacked us pretty hard at the start. Once they got away, we found it hard to bring it back.”

Pakistan kept up the pressure with the ball, with Afridi taking the vital early wicket of Aaron Finch when the Australian captain had made just 16.

Bowling from the Golf Course End, Afridi swung and seamed the ball prodigiously to trouble the batsmen. He trapped Glenn Maxwell lbw, and then rattled D’Arcy Short’s stumps as Australia slipped to 75 for 5.

“Since yesterday I’ve been planning on getting [Finch and Maxwell’s] wickets, and trying to work out how to get them early,” Afridi said after his second international match for Pakistan. “I think [Australia’s bowlers] didn’t take advantage of the pitch. The ball was seaming around a lot, and that’s why we pitched it up when we bowled.”

Australia’s chase never recovered from the early losses, with the rest of Pakistan’s attack chipping in with wickets in a much-improved performance.

The two teams will meet again in Sunday’s final, and Afridi lined up Finch as a key wicket in that game. “Finch is their main batsman and he’s playing really well, so I’ll focus particularly on trying to get him early on Sunday,” he said.