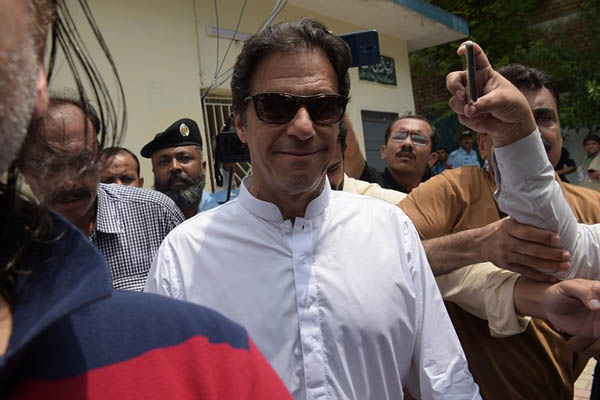 Some friendly advice for the incoming Prime Minister of Pakistan

Let me first congratulate you on a win that had already been predicted, though its scale does come as a surprise. You are now in a position to form the government and assume the office of the Prime Minister of Pakistan.

You have fought hard for this day, shown tenacity and resolve, learnt your lessons while fighting, got your boots and hands dirty, and traveled from realizing your ideal to idealizing the real.

In other words, you have lost your innocence, a price all of us have to pay as part of growing up. It’s symbolized in the Fall of Man, the journey from Eden to this world.

You have often said that Dr. Muhammad Iqbal is a poet-philosopher you look up to. Iqbal, in his Reconstruction of Religious Thought in Islam, determined that the journey from Eden to the world is in fact a movement from the state of simple consciousness to a state of self-consciousness. That’s the paradox. We all live it. You have lived it in the past year-and-half, if not the past five years, and now you will live it as the chief executive of this country.

You have the experience of running a province and you must have done well there for that province to return your party to power. But now you will be running Pakistan and your constitutional responsibilities and remit will include subjects you have never dealt with before. That poses a different kind of challenge. Up until now you had the luxury to judge others in the hot seat. That’s easy. Being in the hot seat, however, requires a different skill set and you will have to deal with others who will perform the function you were performing when in opposition.

As you know, having iterated it over the past five years, the PMLN government has left Pakistan facing multiple challenges. That is the cross you will have to bear now. I am sure you can tide the first six months by dumping whatever doesn’t go right on the PMLN. Beyond the first year that strategy won’t really work. The polarization you have created, and which has worked well for you as a mobilization strategy, will now work against you. Paradox, as I noted above, is the albatross around our necks.

The only way you can mitigate the fallout is by reaching out and healing. As the prime minister, you are as much the leader of those who did not vote for you as of those who did. The strategy of mobilization required burning bridges; the imperative of governance will require building them. That will be your first challenge and, at a minimum, will require a change of tone. Confrontation will have to give way to cooperation, anger to self-composure.

Your second challenge will be to resuscitate Parliament. I say this because you cannot afford to stay away from the House that underpins your legitimacy and constitutionality. The now-convicted former prime minister rarely visited Parliament. Your presence was even rarer. That has to change and your guiding light in that regard should be former prime minister Shahid Khaqan Abbasi, not Nawaz Sharif, and certainly not your past behavior.

There’s a need to start the tradition of Prime Minister’s Question Hour. It is vital for strengthening Parliament and working in and through institutional mechanisms. Sharif also did not make use of the Cabinet Committee on National Security. You must. Again, P.M. Abbasi, not Sharif, should be your guide in that.

Building bridges and working institutionally is also important for the work cut out for you to purge the Constitution of the many anomalies that have crept into it. On the campaign trail you have said many things that betray a woeful lack of understanding of what minorities and disadvantaged groups go through in this country. As the prime minister, having won the prize in a dirty fight, you now need the crisp, white shirt. What you do or do not do to strengthen the institutional working of Parliament and cleansing the Constitution will determine your legacy.

The economy will be your next challenge. I am not an economist; nor are you. But the country has a very good pool of economists and you can build a great team from among them. Unlike Sharif, you do not carry the burden of Ishaq Dar and that’s a blessing. Independent economists are already warning of a balance of payments crisis. Once you are done blaming Dar, and rightly so, you will have to get down to the task of steering the economy out of its current predicament. Again, your point of reference should be Dr. Miftah Ismail and not Ishaq Dar. If Dr. Ismail could manage some policies despite the debris of Darnomics, you can too.

Your two other challenges will be foreign and security policies. Since I have a personal interest in both these areas, I have followed your statements on foreign policy issues, as also security, rather closely. The unvarnished truth is that you have little to no knowledge about either. For instance, your muddled thinking on fighting terrorism did a lot of harm by creating confusion about whose war we were fighting and why.

As the prime minister you need to clear your cobwebs. The situation in the Middle East, West, Central and South Asia, the Far East, the rise of China, the U.S.’s ‘pivot to Asia’ et cetera are issues you will have to deal with. Terrorism and nuclear proliferation are two other issues you will have to tackle in relations with the West in general and the European Union in particular. You have the advantage of a very professional Ministry of Foreign Affairs. You will need to choose a good team leader as the minister who can exploit the institutional strength of the professionals at MoFA. Sharif didn’t do that. You should, especially because you are unfamiliar with the complexities and intricacies of foreign affairs. You will also need to understand that managing interstate relations is not about using a moral compass. In other words, it’s not poetry; it’s hard-nosed prose.

On the security side, like other civilian governments, you don’t have any in-house expertise to deal with the military or understand the security sector. Unfortunately, given the problem of civil-military relations in this country, a problem whose full measure you shall now get, the defense portfolio has reduced to a sinecure. The Services chiefs, especially the Chief of Army Staff, have never considered the defense minister their boss. It is unlikely that you will be able to change that thinking. Chances are that it will be business as usual on that front.

But it is precisely in the twin areas of foreign and security policies that your constitutional authority will be challenged. The military has a deep institutional interest in both these areas. The friction with civilian principals almost invariably begins when a constitutionally-mandated prime minister tries to explore approaches that do not rotate, to use a metaphor, through the polygonal rifling of G-3. If you surrender your prerogative, you will survive, wings clipped. If you press your prerogative… well, you will learn on the job, as did Sharif before you.

There’s much else, but I am sure you get my drift.

On that note, I shall end this letter. Congratulations, again and all the best for the time on the Iron Throne.

Postscript: This letter was written before Mr. Khan made his victory speech. Going by what he said, he did well to adopt a conciliatory tone. He also made some good points on the foreign policy front by talking about normalizing relations with the neighbors.

A very balanced advise. The would be PM would do well to work closely with all state institutions especially the one mentioned in the end. Remember the dominant institutions do their home work diligently and systematically which is a serious problem with all others.

Sensible advise, but it smacks of arrogance and “know-all”attitude which is trade mark Eijaj.

Khan accomplished his mission after going through the rough and tumble of politics, and in the process lost his innocence in more than the sense it is normally understood. From Oxford-educated playboy , he has evolved into a strange political being if his ideology is defined by his views on Blasphemy Laws, Ahmediyas,, jehadis, women and liberalism. Add to this, his ideals of a state —governance as it existed in then 7 th century Medina and Scandinavian democracy.Political observers will also be curious on how he seeks to unveil the Islamic welfare state. With so much on his plate, can Khan have time and inclination to fulfill Ijaz Haider’s wish list?

I share your view. He has shown a very questionable eagerness to climb into bed with bigots and murderous cults. He has also not been shy of courting help from antidemocratic forces. He cannot simultaneously serve those whose largesse he has enjoyed and those he has been elected to serve. This EH article is almost innocent in its childish arrogance.

Most of the corrupt politician had left their previous parties and migrated into Khan team. Fear among people of businesses and bread earnings. And many times Khan made Uturn.
Now khan has to work what he promised for the country. As this not a cricket match , its a country on stake.

Very well articulated. In the end what will determine the epitaph on IK would be how much he lost in the journey from Eden to Earth. Did he loose what was just essential to make it or more than that. Small over doses would not matter but change of medicine would.
He is not expert on many things. Most leaders are not, even the very successful ones. He needs some time A good team selection would do that otherwise he won’t get the 6 months to a year grace period. Honey moons he had enough