Home Lightbox The End of Ideology

The End of Ideology 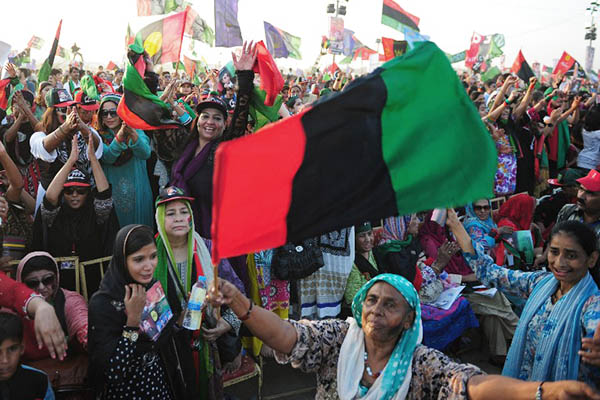 Management, not manifestos, are driving voters to or from the three big parties.

Ideological politics in Pakistan is dead.

Given that parties like the Jamaat-e-Islami are still around, this may seem like an overstatement. But the fact is that the Jamaat and other (less sincere, more ostentatiously corrupt) Islamist parties have a recognized, and recognizably limited, role in Pakistani politics. As far as mass-market parties are concerned, the politics of ideology is finished.

There are three political parties that can credibly claim to be national and which have a shot at supplying the next prime minister: the Pakistan Tehreek-e-Insaf, the Pakistan Peoples Party, and the Pakistan Muslim League (Nawaz). And there’s scarcely any ideological difference between them.

The PTI never even purported to have an ideological agenda. All it offered was the promise of honest competence in government through technocrats.

The PPP once was “liberal” and “left of center” while the PMLN was right of center and vaguely more religious. The PPP progressively jettisoned its socialist baggage during the 1990s. When it returned to power in 2008, it did not even purport to have a socialist agenda of any sort. Besides the Benazir Income Support Program, it did nothing, as far as I know, to establish its liberal credentials.

The PMLN seems to have mellowed as well. While the PPP has moved to the right in its economic policies, the PMLN has moved left in its social policies. There is no effort underway to designate Nawaz Sharif as amir-ul-momineen. For that matter, there is no debate over the BISP either. Not only has the program continued, but one of the PMLN’s brighter bulbs has been put in charge.

If the politics of ideology is dead, what comes next? Social scientist Max Weber divided theories of political legitimacy into three categories: historical, charismatic, and rational-legal.

Historical legitimacy means that the person in power was accepted because somebody like that person had always exercised that power. In other words, the son was the legitimate ruler because the father had been king before him. Charismatic legitimacy means that the person demands your vote because he (or she) has special knowledge or powers. Rational-legal legitimacy is transactional: you accept somebody as your legitimate ruler because he gives you better housing or cleaner water or, even better, both.

In Pakistan the range of rational-legal arguments on offer has collapsed into one broad, generally accepted set of policy prescriptions. The PTI, PMLN and PPP manifestos are essentially interchangeable. How then do they distinguish themselves?

The PPP has apparently decided that competence is overrated and that power can be sought (or at least justified) on the basis of a charismatic/historical argument (e.g., vote for Bilawal because his mother and grandfather were special people). There are few buyers for this narrative today. Pakistan’s young voting public has no memory of Zulfikar Ali Bhutto because most of them were born a decade (or more) after his death. The PPP’s problems are further compounded by the fact that the differences between Sindh and the Punjab are visible on TV and Twitter. A person who knows no better may well buy into the Bhutto mystique. But a person who has ready access to a television can now easily compare life in Karachi to life in Lahore.

In the case of the PTI, the party’s claim to power is based on a combination of the charismatic and the rational. The charisma comes from the party chief, Imran Khan; the rational part comes from the team of technocrats he has assembled. Vote for us, the argument goes, and we will not only give you good governance but an incorruptible leader to watch over everybody else.

As the 2013 elections showed, the PTI’s pitch has massive appeal. But then as the PTI’s post-election decline in popularity shows, there comes a time when people want less promises and more delivery. Fortunately for the PTI, its leaders have a better grasp of this fact than the now-based-in-Dubai leadership of the PPP.

The decline of ideology is a good thing to the extent it has rid Pakistan of dumb ideas (like wanting to nationalize ginning factories or wanting to become amir-ul-momineen). At the same time, the fact that our major political parties have no meaningful ideological or policy-based differences with each other reflects a startling, and distressing, poverty of intellect. The current confluence of views is not the inevitable result of democracy being allowed to run its course. Instead, what this consensus reflects is the weaknesses of a state in which all thinking has been done by others, never the elected leaders. Since 1947 the role of the legislature has been, and remains, largely decorative.

If Pakistan is to progress faster, it will have to move beyond the current situation where policy expertise is either provided by foreigners or the Pakistan Administrative Services. Neither should be the final decision-maker when it comes to policy. Many Pakistani pundits are afflicted with a binary view of democracy; they view every deviation from an ideal democracy as good grounds for its disruption.

The near-total indifference of our legislatures to matters of policy should not be taken as an argument for technocratic rule. Yes, most of our elected representatives are not able to discuss the niceties of economic policy. But we have already graduated from a situation where votes were being demanded primarily on the basis of personalities to a situation where votes are being sought on the basis of relative competence. Once the principle of competence per se is established, the natural competitive drive of the political parties will force them to stake out different parts of the policy spectrum.

This Article is too much of a Broad Brush on the difference and/or similarities between the Three Main Contending Political Parties. The Article presents as if there are no differences between the Parties & the Tip Leaders.

PMLN is a Party favored by the Merchant Class. They have considerable Overall Experiencd In Actual Governance, though they do invite few Major Major criticisms: Suspected Corruption in their past Two/Three Tenures, secondly they have a Baggage If Being Anti-Army in the not too distant Past. And the CM Punjab does not delegate much. The PM is no better, because he has kept Foreign Ministry with himself, with consequent damages to Diplomacy. Also there is too much dependence on the Inner Kitchen Cabinet…resulting in frustration among other aspirants. However, one thing is clear: they have the top alternate leadership in Shahbaz Sharif…only if he learns to delegate. In my opinion, they would be hard to replace at least in even 2018…!

As to PTI, their Leader IK is personally clean in money matters and integrity. However, he does not believe in delegation also. He is aloofish and Dictator type in his approach and too much of “I, Me & Myself” style of a Cricket Captain. He is not a good Loser as demonstrated by his absence from the NA after a NO decision on his Allegations Of Massivd Orgainized Rigging to deprive his Party the Federal Govt & him the Top Slot. They have ghost of a chance to win majority in GE 2018, because they have not penetrated about 200 Towns still. Long Shot for GE 2023..!

PPP is sunk and gone in Punjab, KPK & Balochistan. Their 2008-13 Governance was beset by Charges Of Corruption Of Himalayan Proportions against a lot of their Leaders, with Two PMs slung out by conviction for one thing or the other by the SC. AAZ has gone to Dubai & has many Stigmas yet to be cleared of all. Bilawal Zardari is too young and inexperienced in Politics and the use of Urdu & Sindhi Languages. He has a lot to learn. Therefore, PPP has very little chance till 2023 & that too if they let someone else to lead in the intervening time..!