A Sense of History 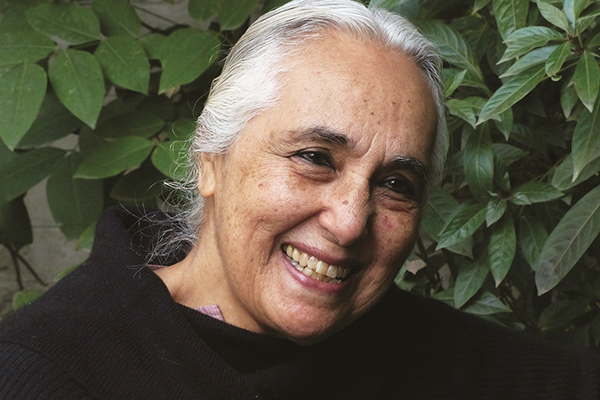 In session with Romila Thapar.

Romila Thapar, professor emeriti at the Jawaharlal Nehru University, ranks among the world’s foremost historians and delivered the keynote address at this year’s Lahore Literary Festival (LLF) on Feb. 20. We spoke with the celebrated 83-year-old academic recently about all things history. Excerpts:

Napoleon said history is the version of past events that people have decided to agree on. Does one have to agree with the narrative or the interpretation of it?

No doubt Napoleon had good reason to think or even fear that history is the version of the past that people have decided to agree upon. Today such a statement would be unacceptable to historians as much has happened in the discipline of history during the last 200 years. The historian is a narrator, but implicit in the narrative is the interpretation of the data. The viability of both is dependent on three steps in the process of writing history. Information on a subject is collected from as many sources that can provide it, and the reliability of this information has to be checked—this is essential as else all kinds of fantasies can be passed off as data. This information is then analyzed through the answers that a historian gives to a range of questions that are asked. This shades into the third step, which is interpreting the data. Needless to say the third step implies that whatever generalizations are made should be based on reasonable and logical argument. Examining the cause of an action is the basis of historical analysis and understanding. Because history is no longer only a narrative of events but requires an interpretation of these, there can be differences of interpretation. The reliability of the data can be questioned. Agreement or disagreement depends on the validity of the arguments. Interpretations do vary and can lead to debates. Provided the level of discussion remains intelligent, the debates can be stimulating. Historians do not claim to be giving definitive answers. They are sensitive to the possibility of new sources and fresh interpretations. It is often the general public that wants definitive answers. Since the past cannot be recreated and demonstrated, we can at best try and understand it and agree on what might be the best understanding—but keeping in mind that even this could change with new evidence and new ways of examining it.

Why do nations need history? What happens to history when nationalism gets attached to it? In Prejudice and Pride: School Histories of the Freedom Struggle in India and Pakistan, Krishna Kumar took on the subtle task of examining history textbooks and wrote: “Both countries live with the assumption that they know each other. The ‘other’ after all is a former aspect of the ‘self.’ History is often a narration of wars. Can it be the ‘cause’ of war?

All societies have a sense of the past that they represent in various forms. Some have a historical consciousness that we more readily recognize as it is a more ordered representation of the past as history. But this is different from the use that is made of the past at various times in the history of a community, a society, a country. Nationalist ideologies articulate the aspirations of particular groups in society. They then don’t hesitate to use history. This is evident from the way the anti-Colonial movement internalized history in the Indian subcontinent, and the way in which religious nationalisms also sprouted. The latter appropriated colonial readings of history to a substantial extent. More recently historians have been looking at the ideologies of other groups lower down in society. In the 20th century the use of a so-called history by fundamentalist religious ideologies of all shades—Hindu, Muslim, Sikh, drawing from Colonial interpretations, became quite clear. Insisting on their views can bring them into conflict with historians, as has happened, especially when they insist that there can be only one narrative, which they dictate and which cannot be questioned. History in post-nationalist times becomes more problematic. For one, there is a difference between the history written by trained historians and that which is essentially ideological propaganda claiming to be history. There is also at this point the demand that a nation’s history must include that of more than just the majority groups—however ‘majority’ is defined. Nationalism identifies particular groups as prominent but then in post-nationalist times other groups demand recognition and historical accommodation. History is no longer a ‘soft’ subject about which the opinion of every man and his wife holds true, nor for that matter is it the version of past events that people have decided to agree upon. As for wars, they are now less central to historical discussion. Wars since early times have not been caused by history, or by Cleopatra’s nose. History discusses the causes of wars but in itself it is not the cause of war. In the recent history of South Asia, it is the political attitudes that are constructed through the way in which history is represented that have been used to fan hostilities. Colonial interpretations deliberately fueled Hindu-Muslim antagonism, but in recent times historians have questioned these. Discussion on this subject goes into the causes of conflict, where it existed and why. Historians today hesitate to accept the descriptive labels, bracketing large communities said to be thinking and acting conjointly in a uniform way.

Normally there should not be much difference among historians working in their home country or working in universities abroad. The sources to be consulted are the same. Some are more easily accessible in the home country and others in libraries abroad. The big problem in our countries is getting up-to-date publications published abroad as they are prohibitively expensive; and also because not all those heading research institutions realize how crucially quality research is dependent on the excellence of libraries. There also has to be an intellectual ambience of asking questions of authorized knowledge for there to be good history writing. In our countries we can be heavily abused if we question conservative opinion or the propagandist versions of history that come from fundamentalist ideologies. It takes more than normal courage to assert intellectual freedom. Obviously not every university in our countries is going to produce a state-of-the-art historian, but a critical mass is what is required to bring in change. The brighter students go in for studies that are glamorous and well-paid which is fair enough. We shall have to convince them that the more rooted disciplines have a value of a different kind and are equally necessary. As for the ‘presumed’ audience, it is primarily an academic audience of one’s peers in the field, and of students hopefully with new ideas. Our societies lack the ‘middle man’—the person who understands the ideas being discussed at the research level and knows how to make them intelligently popular. As far as the public is concerned there is still too great a reliance on hearsay and gossip rather than on serious reading. As far as general audiences go, societies abroad are not too interested in the history of South Asia—unless one is addressing a population of nonresident Indians and Pakistanis. The ideas that many in such groups have about their history are frequently dated and often extremely conservative and virtually fundamentalist. Their problems of living in an alien culture lead to their using the past as an agency of self-confidence and to endorse their earlier identity. These ideologies are not absent in the homeland but they do have to contend with larger numbers of those who hold secular positions. In the homeland the ripples of a rigorous history go out much further.

India and Pakistan are politically so far apart and culturally and geographically so close that there is no room for an epistemic space between them. Yet there is a deep ‘enmity of the civilizationally related’ between them, which Freud put so neatly in his phrase ‘the narcissism of small differences,’ and their diplomats best represent it. How can the historian help here?

The historian can help. If history is important to the creation of a nation, as it seems to have been, then implicit in this idea is that it can give some insights into the kind of society that the nation may want. History is after all not just a narrative. In its interpretative aspects it can provide a commentary on past societies together with critiquing or applauding some of their facets. It can draw attention to comparable situations in other countries and what that resulted in. But historians cannot force citizens and their representatives to choose a form of society. They do not control social change. I don’t believe that there is necessarily a deep enmity of the civilizationally related nor is there, alternatively, an automatically deep friendship. Relationships are determined by circumstances but at the same time need to be insightfully understood, nurtured, and cultivated. History can provide some of that insight by watching closely what the premises of the relationship are and how they change. And, as in all relationships, there is the narcissism of small differences. The historian can help to keep the difference small and to be watchful of a difference becoming threatening. This is done not through propagating a particular ideology but by showing where society is at, and what its destination could be.

Thapar is the author most recently of The Past as Present: Forging Contemporary Identities through History. She declined the Padma Bhushan award in 2005 and was the co-winner, in 2008, of the Kluge Prize for the Study of Humanity. From our Feb. 14-28, 2015, issue.