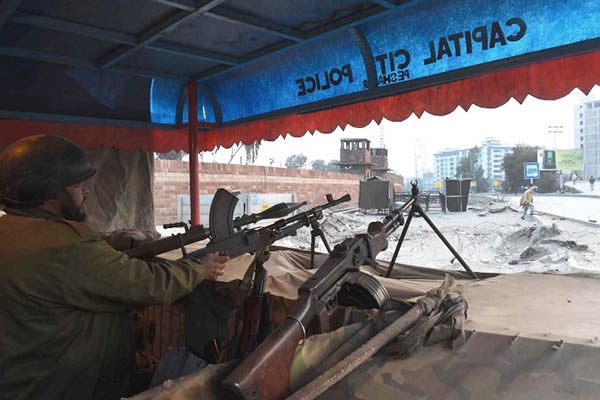 A security official guards the Central Jail in Peshawar. A. Majeed—AFP

Niaz Mohammad had been convicted of targeting the former president in December 2003.

A man convicted of attempting to assassinate former military ruler Pervez Musharraf was hanged on Wednesday, the seventh execution since the country lifted a moratorium on capital punishment after its bloodiest-ever terror attack, officials said.

“Niaz Mohammad, 40, was executed today and his body was handed over to relatives,” said an official at Peshawar’s high-security Central Jail. Mohammad was convicted of attacking Musharraf in Rawalpindi, the official said on condition of anonymity, as he was not authorized to speak to media. Another prison official confirmed the execution.

The attack, which took place in December 2003, involved a powerful explosion targeting the former president’s motorcade as it was passing over a bridge in Rawalpindi. The motorcade escaped the explosion by a matter of seconds, however, and no one was injured.

Muhammad was a former Pakistan Air Force technician from the Yaar Hussain region of district Swabi in Khyber-Pakhtunkhwa province. He was a close aide of Adnan Rasheed, the Tehreek-e-Taliban Pakistan commander who was freed in a jailbreak from Bannu in 2012. A military court sentenced Muhammad to death in 2006.

Islamabad earlier this month lifted a six-year moratorium on the death penalty in terror cases, a decision that came amid public outrage over a Taliban massacre at a school in Peshawar which killed 150 people, including 134 children.

Of the seven people hanged so far, six were involved in the failed attempt to assassinate Musharraf in Rawalpindi in 2003, while one was involved in a 2009 attack on the Army headquarters. Pakistani officials have said they plan to hang 500 convicts in the coming weeks, drawing protest from international human rights campaigners.

Prime Minister Nawaz Sharif has also announced the establishment of military courts for terror-related cases in order to accelerate trials, describing them as “an extraordinary solution to an extraordinary problem.”