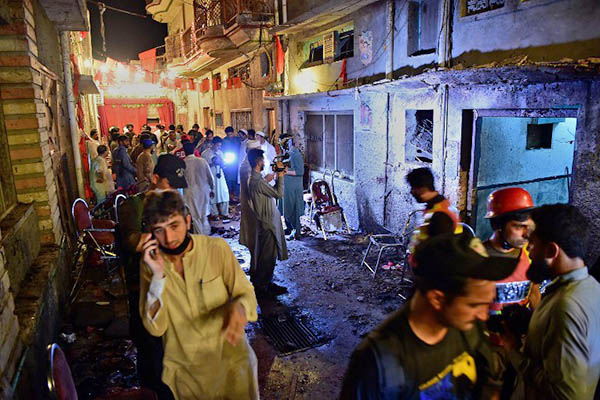 A suicide bombing at an election rally in Peshawar killed at least 13 people, including a politician, on Tuesday, police said, amid concerns about security ahead of national polls later this month.

The attack targeted a campaign event organized by the Awami National Party, which has been targeted by Islamist militants in the past over its vocal opposition to extremist groups like the Taliban.

The bombing came hours after Pakistan’s military spokesman said there were security threats ahead of national elections scheduled for July 25.

Haroon Bilour was one of the ANP’s election candidates and belonged to an influential political family in the Khyber-Pakhtunkhwa province, of which Peshawar is the capital. His father Bashir Bilour, one of the ANP’s top leaders, was also killed by a suicide bomber in 2012.

“According to our initial investigation, it was a suicide attack and Haroon Bilour… was the target,” police official Shafqat Malik told AFP.

Police said the bomber struck when Bilour was about to address some 200 supporters.

Local television channels broadcast live scenes of ambulances arriving at the site and rushing victims to the hospital. Some people were seen crying. No one immediately claimed responsibility for the attack, but there have been dozens of such bombings in recent years in Peshawar. They have often been claimed by the Pakistani Taliban and their allies.

The city is considered a gateway to Pakistan’s troubled semi-autonomous tribal regions, where many militant groups—including Al Qaeda—operated until the government launched operations to oust them. Militants have targeted politicians, religious gatherings, security forces and even schools in Peshawar.

This was the first major attack on a campaign event for Pakistan’s July 25 general elections.

Police chief Jameel said the number of casualties was high because the ANP event was taking place at a house in a narrow street. An AFP reporter saw human remains, shoes, broken chairs, and caps littered at the scene.

Sartaj Khan, an ANP supporter, sustained wounds on his feet. “I lost consciousness after the blast. The last thing I saw was a big ball of fire,” he said.

The Election Commission of Pakistan has asked the military to help hold a “free and fair election” in the face of security threats. More than 380,000 personnel will be deployed for the elections, according to Major General Asif Ghafoor, the military spokesman.

The ANP and its ally the Pakistan Peoples Party were unable to campaign for the last general elections in 2013 because of threats and attacks on their events and supporters by Islamist militant groups like the Pakistani Taliban. But ANP leaders have vowed to continue their campaign this year despite the bombing in Peshawar.

Pakistan has been fighting a homegrown insurgency since 2004, when militants displaced by the U.S.-led invasion of Afghanistan came to its border tribal areas. These groups have often targeted political parties and leaders opposed to their views. Officials have said that while the threat remains, militants have been significantly weakened because of military operations in recent years.

Pakistani militant organizations have claimed responsibility for attacks on several prominent political figures, including the assassination of former prime minister Benazir Bhutto in 2007.