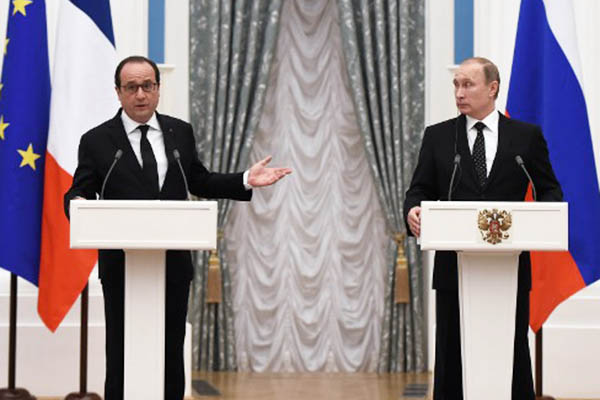 Experts claim Russia will not accept acting under U.S.-led alliance, nor will the West support giving Moscow operational veto power.

Despite talk of a grand coalition between Russia and the West against the Islamic State group, experts warn that any such project would quickly run into obstacles.

Russia’s ambassador to France became the latest diplomat to push the idea of greater cooperation between East and West on Wednesday, floating the prospect of a “joint command” against Islamic State jihadists. It’s an idea with particular currency in France, still reeling from the Paris attacks, whose President Francois Hollande called for a “large and single coalition” against I.S., and is dashing from Washington to Moscow this week in a bid to rally supporters.

But few experts see it as a serious proposition, and the shooting down of a Russian fighter jet by Turkey on Tuesday underlined the challenges of forging a united front and the extent to which each actor is pursuing its own interests.

“Either it’s a coalition dominated by the United States—and Russia will not accept being under the U.S. banner,” said Bruno Tertrais, a military expert at the Foundation for Strategic Research in Paris. “Or there’s a joint decision-making mechanism, which would give Russia an effective veto on Western operations, which would clearly be unacceptable.”

Tertrais said there was some scope for joint operations against specific targets, and Russia has clear political motives for talking up an alliance. “Russia will certainly maintain cooperation with France, which gives it a supporter inside the E.U. and NATO,” said Sarah Lain, an analyst at the Royal United Services Institute in London. But she said that cooperation would likely be limited to cautious intelligence-sharing—which Moscow urgently wants after one of its passenger jets was blown up by I.S. over Egypt last month.

Diplomats say coordination against I.S. targets is possible and could make a difference. “When [France] hits oil refineries, and [the U.S.] hits a stock of oil tankers and the Russians say they will hit every oil tanker they see, then you can see the potential synergy,” a senior French diplomat told AFP on condition of anonymity. But many analysts see such efforts as hopelessly small-scale.

“So long as the Islamic State has a population that it can govern, it can continue to provide financing to its fighters and can dedicate resources to both internal and external enemies,” said Firas Abi-Ali, a Middle East analyst for IHS Country Risk in London.

I.S. makes millions not only from oil, but from taxing its population, seizing crops, and extorting money from kidnapping, as well as receiving donations from supporters around the Middle East and beyond. In an interview with AFP last week, counter-terrorism expert David Kilcullen said the U.S.-led coalition was a long way from the sort of “serious air campaign” that was needed to hurt I.S.

The U.S. has been flying 10-15 sorties per day against I.S., he said, compared with 250 strikes per day launched by NATO during the Kosovo war in 1999, or 110 per day during the Afghanistan invasion two years later. “People who say the air campaign has failed need to be told we haven’t done it properly yet,” he said.

Moreover, analysts say no amount of military coordination between East and West will matter so long as they are divided on the future of Syrian President Bashar al-Assad. Russia and Iran strongly support the Syrian leader, while the West wants him out of the picture.

Obama himself threw cold water on the idea of grand coalition with Russia after meeting with Hollande on Tuesday. The Russians need to make a “strategic shift” in their approach to Syria “that, frankly, I’ve talked to Putin about for five years now,” said Obama.

Beyond removing Assad, global powers must also find a way to protect Sunni Muslim populations, since it is their hatred and fear of the Syrian and Iraqi regimes that have fuelled support for jihadist rebel groups. “This is a political question that none of the Vienna talks or various international meetings are addressing,” said Abi-Ali.

In the meantime, the conflict continues to radicalize and harden an entire generation of Syrians and Iraqis. The civil war in Syria will continue to fester until at least 2017 or 2018, Abi-Ali wrote in a briefing note on Wednesday, “with the capability of terrorist groups to control territory and export violence expanding.”