Home Latest News ‘Any Talks With Establishment Must Be Made Public’ 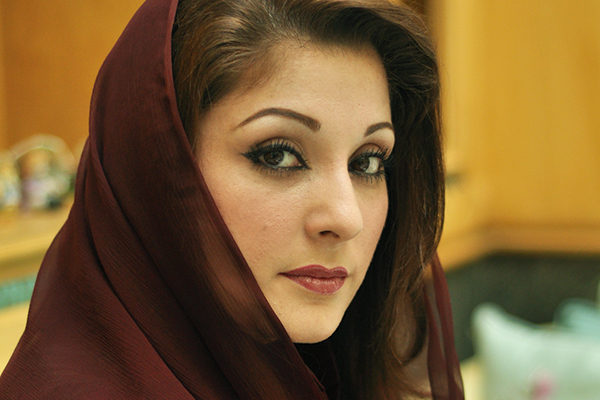 Maryam Nawaz says she is ready to talk with ‘all stakeholders,’ but only after incumbent government has been ousted

Reiterating that she has no personal enmity with the Pakistan Army as an institution, Pakistan Muslim League (Nawaz) Vice-President Maryam Nawaz has said that any talks with the security establishment must be held within constitutional limits and in the full view of the public.

In an interview with BBC Urdu on the sidelines of her campaign for the Gilgit-Baltistan elections, she said that members of the security establishment had reached out to “many people around me,” but added that she has not been directly contacted by anyone.

On whether she would be willing to hold talks with the current Army leadership, whom her father and PMLN chief Nawaz Sharif has accused of orchestrating his “ouster,” she said the “possibility of initiation of dialogue from the PDM [Pakistan Democratic Movement]’s platform could be thought about but only after the selected government has been sent home.” To another question she stressed this must be done through constitutional measures and no illegal means to oust the PTI would be tolerated.

Maryam’s statement echoed an earlier directive by her father in which he had banned his party members from holding any individual, private or delegation-level meetings with the country’s military leadership. He had said that if any such meetings were required for national security or constitutional requirements, they would be approved by the party’s leadership and made public.

Maryam reiterated that while she was willing to talk to “all stakeholders,” there was no point in dialogue with the incumbent government. “The dialogue will be held with the people of Pakistan. It is being held with the people of Pakistan [right now] and it is going so well that the forces and the fake government are worried,” she said, stressing that the public was the “real stakeholder.”

Refusing to comment on a “minus-Imran formula,” she said it would be a “sin” to have any dialogue with the PTI-led government. She also echoed an earlier statement of her father’s in saying that she did not consider Imran Khan or the people around him a “real problem” because they were not political people. “My party and I are against the thought that they represent,” she said. “I consider any alliance with PTI equivalent to forgiving them which is not fair,” she said. “I think it is time for their accountability, not for an alliance with them now that they have been weakened.”

To a question, Maryam said the PMLN’s politics were not headed to any “dead-end,” as claimed by PTI and allied lawmakers. Instead, she said, the ones who made this “temporary” government were the ones heading toward a dead-end.

“Wherever we are going, whether it be Gujranwala, Karachi, Quetta or Gilgit-Baltistan, only one narrative is echoing: vote ko izzat do (respect the vote) and riyasat ke upar riyasat mat banao (no state above the state),” she said, adding the public saw that the protest movement was moving toward the supremacy of the Constitution and the law.

To a question about an earlier BBC interview with PPP Chairperson Bilawal Bhutto-Zardari, in which he said he was “shocked” by Nawaz Sharif’s naming of the incumbent Army chief and looked forward to seeing evidence of this, Maryam said the evidence was already in front of the public. Bhutto-Zardari had added that a three-time prime minister would not have taken the names of either Gen. Qamar Javed Bajwa or ISI chief Lt. Gen. Faiz Hameed without any evidence.

On the Army’s recently completed Court of Inquiry into the alleged kidnapping of Sindh’s top cop in a bid to pressure him into issuing arrest orders for her husband, Capt. (retd.) Mohammad Safdar, she said the ISPR statement had raised more questions than it had answered.

“You are telling the people that some overzealous officers did this under pressure from the public’s reaction. What public reaction was there? Those fake people who registered the case and then ran away, those three, four people are what you call public pressure?” she said, adding that it was not the job of institutions such as the ISI and Rangers to respond to public reaction.

“The responsibility of institutions is to fulfill their professional responsibilities, not show overzealousness. Their work is not emotions but fulfilling their constitutional and professional obligations. If someone did in fact do this out of emotions, then it is a huge moment of reflection for the institution and Pakistan,” she said, adding that she believed some “junior officers” were used as sacrificial lambs.

“I do not even want to take Imran Khan’s name [in speeches] but he represents everything that should not be in this country. So when I talk about the inflation in prices of flour, sugar, gas and electricity, who else can I name but Imran Khan? And the biggest problem of the people is that their vote has been stolen,” she said. “The economic situation cannot be improved in the hands of these inefficient people. This is what happens when the vote is stolen,” she added.