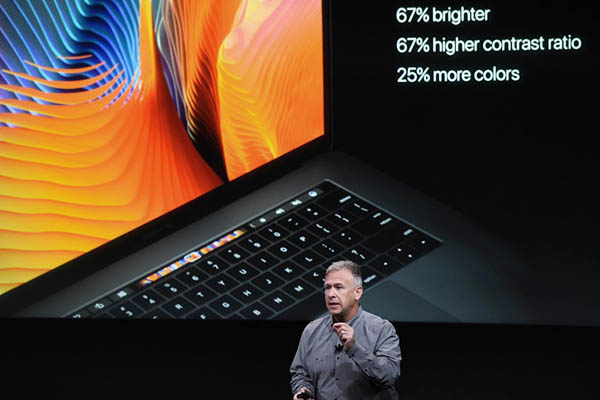 New models featuring ‘Touch Bar’ on keyboard to start at $1,799.

Touch Bar adapts to display controls most relevant to whatever application is being used, from email or typing text to video editing or music mixing, demonstrations showed.

“Apple now has the most compelling and coherent lineup of laptops it’s had in several years,” said Jackdaw Research chief analyst Jan Dawson. “But, Apple’s laptops no longer enjoy the kind of big hardware advantage they’ve had in the past.”

The event came a day after Microsoft unveiled a high-end computer along with an updated Windows operating system that showcases three-dimensional content, touch-screen capabilities, and “mixed reality.” The U.S. tech giant announced its first desktop computer, called Surface Studio, a $3,000 high-end “all-in-one” device that aims at creative professionals, a segment dominated by Apple.

Microsoft is aiming to keep users on Windows as many switch to new mobile devices powered by Apple or Google software.

Apple is intent of guarding the loyalty of Mac users and winning new fans to its ecosystem. Shipments of Apple computers slipped to 4.42 million in a decline of slightly more than eight percent from the same period a year earlier, according to industry tracker IDC. Industry reports released this month showed that shipments of personal computers overall slid anew in the recently ended quarter as lifestyles continued to shift to smartphones and tablets.

Apple on Thursday also introduced a new TV application crafted to use iPhones, iPads and internet-video streaming boxes hubs for television viewing. “Now, there is a unified TV experience; one place to discover and enjoy your favorite TV show and movies across all your devices,” Apple chief executive Tim Cook said at the event.

Siri virtual assistant is built into the TV application, allowing people to ask for shows or searches naturally, a demonstration showed. The software allows for viewing live broadcasts and can search out content available in other applications on Apple TV. Notably absent from Apple’s television mix was leading on-demand video streaming service Netflix.

“The new TV app should make Apple TV easier to use, and create something more analogous to the programming guides on pay TV services,” said analyst Dawson. “However, Apple’s ability to get holdout app makers like Netflix on board will determine how useful the app ultimately is—the proposition breaks down pretty quickly if major apps are missing.”