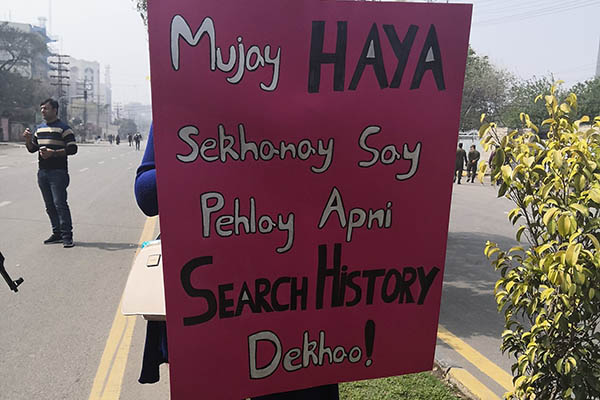 One of the posters from Aurat March 2020 in Lahore. Twitter

People of all genders and hailing from all segments of society took to streets across Pakistan on Sunday to mark International Women’s Day with the Aurat March 2020, the third annual protest demanding equal rights for all.

The first Aurat March in Pakistan took place in 2018, largely focusing on Karachi. The second iteration, in 2019, expanded to major cities across the country, including Lahore, Multan and Faisalabad. This year’s Aurat March was larger still, incorporating areas such as Sukkur, Quetta, and Thar.

While largely peaceful, this year’s march was marred by clashes in Islamabad, which broke out as participants of a counter-protest, the ‘Haya March,’ started throwing stones at the Aurat March supporters, forcing police to intervene and broker peace.

Led by students of the Jamia Hafsa madrassa—which was also responsible for provoking the Lal Masjid siege in 2007 and claimed responsibility for defacing a mural in the federal capital last week—the ‘Haya March’ was organized across the street from the Aurat March, with the two protests only separate by a single tent.

The subsequent violence resulted in at least one member of the Aurat March being injured, prompting organizers to question the security measures that had been promised by authorities to ensure their safety. The incident was also condemned on social media, with Human Rights Minister Shireen Mazari saying “violence in unacceptable” regardless of differences of opinion.

“Strongly condemn the stoning and violence against peaceful gathering of women, men and families in #AuratMarch2020. Our religion teaches tolerance and Sabr. It does not allow throwing stones and sticks at unarmed people one disagrees with. Can disagree with them but violence is unacceptable,” the Pakistan Tehreek-e-Insaf lawmaker posted on Twitter. In a follow-up tweet, she praised the capital police for promptly bringing the “difficult situation” under control, with minimal injuries.

Also in Islamabad, women supporters of the Jamaat-e-Islami staged a march outside the National Press Club. Addressing the participants, JI chief Sirajul Haq urged the Election Commission of Pakistan to bar any candidate from contesting polls if they did not give the women of their families equal inheritance rights as per law. “In future, I will not give our party ticket to any man who doesn’t give his sister her [due] rights,” he said. 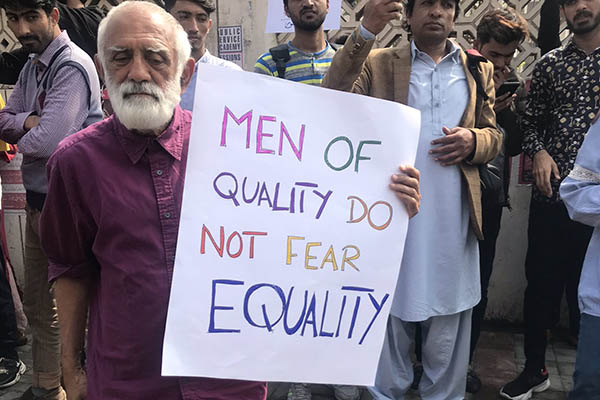 In Punjab capital Lahore, marchers gathered at the Lahore Press Club before heading toward the Aiwan-e-Iqbal, where a few speakers made speeches as those gathered chanted slogans for women’s empowerment and independence. Prominent celebrities and journalists joined the marchers to express their support for the due implementation of equal rights for all women.

In Sindh capital Karachi, marchers assembled at the Frere Hall. Sindh government spokesperson Murtaza Wahab was among the participants of the Aurat March, which was also up against a counter-‘Haya March’ organized by the Pakistan Tahaffuz Movement. Unlike Islamabad, however, no incidence of violence was reported and both protests ended peacefully.

In addition to the major marches in the provincial capitals, people of all genders also turned out at Sukkur, Hyderabad, Multan, Thar, Badin and various other cities to demand equal rights for women, access to education, an end to forced conversions, and greater bodily autonomy.

The Aurat March 2020 last week issued a 15-point manifesto focusing on ‘khud mukhtari’ (independence). It demands an end to IMF-sponsored economic policies and budgets cuts, as well as immediate control of inflation of food items.

It also demands a minimum wage of Rs. 40,000 and the provision of safe and equal workplaces. The manifesto wants to decriminalize defamation laws to ensure they are not used to silence survivors of sexual violence; it seeks an expanded definition of the workplace in anti-harassment laws to include independent contractors and informal labor; criminalization of domestic violence across Pakistan, as well as setting of 18 as the minimum marriageable age for all persons and a halt to forced religious conversion; amendments to anti-harassment laws and sexual assault laws to include all genders as potential complainants.

In addition, the manifesto seeks “concrete actions be taken by the state to curb child sexual abuse and exploitation through effective laws”; anti-discrimination laws to ensure no one is targeted on the basis of sex, sexuality, class, race or disability; demilitarization of campuses in the name of security; justice for families of disappeared persons; Kashmir’s right to self-determination; community-led commissions to deal with violence cause by state and non-state actors, with a focus on gender-based violence; effective implementation of the Transgender Persons (Protection of Rights) Act 2017.

Finally, the manifesto wants all laws impinging on civic freedoms, such as freedom of expression and assembly, to be immediately repealed and an end to censorship of media and online spaces; and it wants the preservation of, and transparency from big corporations on the use of natural resources.