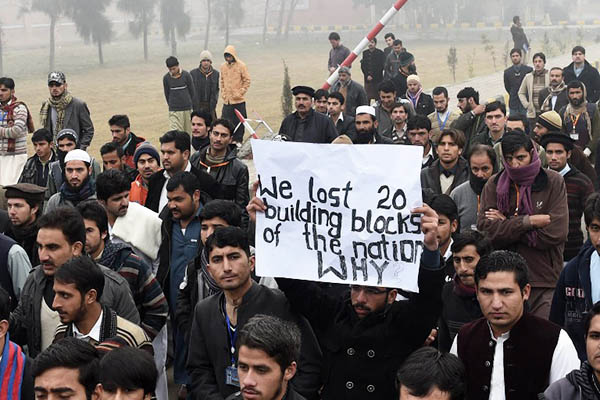 Authorities at the Bacha Khan University in Charsadda, which was attacked by the Taliban last week, have demanded the government arm its staff as it seeks to boost security after the deadly assault in which 21 people were killed, officials said Monday.

“We have demanded weapons from the government and weapons licenses for all teachers and management officials,” said Bacha Khan University Registrar Hamidullah Khan.

Authorities at the university have also called for police checkpoints both inside and outside the campus and watch towers to protect students, he said.

Wednesday’s attack in Charsadda saw heavily armed militants storm the campus, gunning down students and teachers in a bloody rampage before they were killed by the military. Among the 21 victims was a chemistry professor who students said fired his own pistol at the militants before he died in a hail of bullets.

Teachers in Khyber-Pakhtunkhwa province were given permission to carry firearms after the Pakistani Taliban massacred more than 150 people, the majority of them children, at a school in Peshawar in 2014.

The Bacha Khan attack, which bore chilling similarities to the Peshawar massacre, has spurred the debate on arming teachers in Pakistan once more. University registrar Khan said the campus had been reopened Monday but only to administrative staff, with classes suspended indefinitely as authorities seek to improve security.

“Students wanted to resume the classes,” he said. “We appreciate their courage, but we now cannot take any risk on security.”

Students and teachers were being screened by police and security guards at the entrance to the campus Monday, an AFP journalist said. “They [militants] cannot stop us, we will try to face them and continue our studies,” said a student, Abdullah.

University employee Jehangir Khan echoed the call for the government to provide tighter security, noting the university was surrounded by open fields. “Students are afraid,” he said.

A memorial service was held at the university Monday to “pay tribute to the martyrs,” vice chancellor Fazal Rahim told AFP, while Khan said the victims’ belongings were later handed over to their families.

On Friday, the Taliban faction behind both the Peshawar massacre and the Bacha Khan attack posted a video message vowing to target schools throughout the country, calling them “nurseries” for people who challenge Allah’s law.