Home Culture Back to Westeros 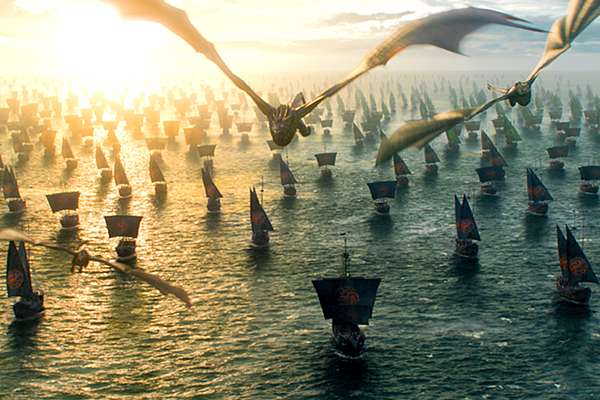 Game of Thrones returned for its season seven premiere on Sunday, ending a longer-than-usual wait for fans craving its unique weekly offer of sex, violence and dragons.

HBO had delayed production, meaning four more months of anticipation ahead of the season debut—already one of the television events every year across the world. But viewers were not disappointed, taking to social media in the thousands to express delight at the explosive start opening, the arrival of dragon queen Daenerys Targaryen in Westeros and a widely hyped cameo by pop sensation Ed Sheeran.

“There are very few shows that can deliver as much action and excitement as the season six Game of Thrones finale, and there are perhaps even fewer shows that can make a table-setting episode this much fun,” the Hollywood Reporter said after the premiere. “So it’s all the more bittersweet that not only is winter here, but the end is in sight.”

The debut episode, entitled “Dragonstone,” saw evil Cersei Lannister (Lena Headey), now ruler of the Seven Kingdoms, making alliances that threaten newly-anointed King of the North Jon Snow (Kit Harington). Trained poisoner and throat-slitter in chief Arya Stark (Maisie Williams) exploded out of the blocks in a shocking opening by taking vengeance on the killers of her family at the infamous Red Wedding.

The comic relief was provided by multiple Grammy-winning Sheeran in a cameo as a soldier who sang a ditty—a “new one” apparently—about a woman’s hand. His appearance started a torrent of memes and excited comments from fans on Twitter, but not everyone was pleased to see him.

Variety magazine called the cameo “ridiculous” while one fan on Twitter quipped: “If Arya kills Ed Sheeran it’ll be worth it.”

For hours either side of the HBO premier at 9:00 p.m. on the U.S. east coast, #GoTS7 and #GameofThrones were the top trending Twitter hashtags worldwide Such was the online interest that the HBO.com website even crashed due to a surge in visitors for the first half of the episode.

For some celebrity fans the wait had been too much—especially for those on the U.S. West Coast who were made to wait an extra three hours. “There is no amount of ‘keeping myself busy’ that makes the wait for #GameOfThrones7 any less painful,” tweeted Josh Gad—Olaf from Frozen. “Twitterverse shut your mouth until 10:00 PM when I’m done watching,” he added as the show began on the East Coast, the HBO Now streaming subscription service and in foreign markets.

Game of Thrones tells the story of noble families vying for control of the Iron Throne, all the while keeping one eye on the “White Walkers” leading hordes of the undead toward an invasion from the North. The show, which has more Emmy Awards than any other narrative series and pulls in more than 20 million U.S. viewers per episode, moved beyond George R.R. Martin’s A Song of Ice and Fire novels in season six. It is due to run for a shortened seven episodes this year before returning for a six-episode final season.

“As per every premiere episode of Game of Thrones, the pace is slow,” wrote Lorraine Ali in the Los Angeles Times. “Setting up each new carefully constructed season—the complex weave of story lines, the huge cast, the breathtaking locations—takes time.” But she concluded that showrunners David Benioff and D.B. Weiss had “pulled it off once again, if not with a bit more humor than in previous seasons.”