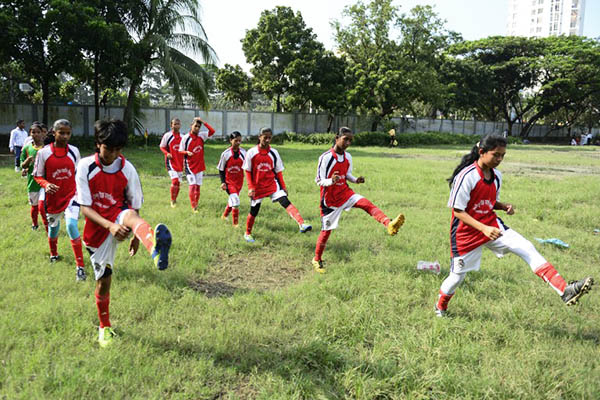 Players from Kolsindur village have won every national tournament with many athletes joining the national team.

Bangladeshi village football coach Mofiz Uddin only decided to form a girls’ team in 2011 out of frustration at the local boys’ failure to bring home any trophies. Less than five years on, his young female players have won every national tournament going, becoming minor celebrities in the conservative, Muslim-majority nation.

To do so, they have had to overcome parental opposition and deep-seated social prejudices in a country where child marriage is rife and most girls have little or no access to sport. “These girls are our heroes,” 70-year-old villager Akbar Ali told AFP as he watched the girls practice in Kolsindur village, near the border with India. “They’ve brought many laurels to us. Kolsindur is now a famous village, and it is well known around the country because of them,” said Ali, who was among a small crowd of villagers gathered around the pitch.

More than a dozen of Kolsindur’s players have already played on the national girls’ team, among them 12-year-old Tahura Khatun, a diminutive striker nicknamed the “Kolsindur Messi” after Barcelona player Lionel Messi.

She lives in a mud house with her five siblings, parents, two uncles and grandfather, and says she would have quit without the support of her coach and teachers. Tahura’s family does not want her to play now she has reached what they see as an “adult age.”

Many girls in Bangladesh are married by the time they are 13, and Tahura’s grandfather worries that her playing will make it impossible to find a good husband. One of her teammates, midfielder Ruma Akhter, hung up her boots aged 13 after her father told her she was disgracing the family.

But Tahura remains defiant. “I want people to recognize me for my talent, my work,” she told AFP. “I don’t want to become a housewife like my mother and have to depend on my husband’s kindness.”

The girls first started playing on a field grazed by cattle and littered with dung. They had to play barefoot because proper football boots would cost almost the entire monthly income of most farming families.

The long kurtas or tunics and baggy trousers traditionally worn by Bangladeshi girls were less than ideal for running after a ball, but initially the players had little choice. “Their parents did not like seeing their daughters wearing shorts and kicking football around in front of male villagers,” said team coach Uddin. “Some wondered why the girls had to play a game meant for boys.”

Now they play in football shorts and jerseys, and many of the villagers who mocked the idea of girls wearing “half-pants” have been won over.

The villagers raise funds for the team before every big tournament and some, including 70-year-old Ali, even travel with the team to watch them play. Last month, deputy sports minister Arif Khan earmarked $12,500 to build a proper soccer pitch. “They are simply doing great despite poverty,” said Khan, a former captain of the national football team.

Women’s football is relatively new in Bangladesh, a mostly Muslim country that has experienced a recent upsurge in Islamist militancy. When the country decided to put together a national women’s side in 2009, officials worried they might not even be able to find 11 female players.

Today, the women’s team is placed 128th in the world, well ahead of the men in 178th place. In 2011 the national soccer federation decided to launch an inter-school competition for girls, and Uddin saw his chance. Backed by school authorities, he trained a group of girls and took them to a couple of local tournaments where they tasted their first success. Now he coaches a 50-strong squad aged between seven and 16 and his team has represented Bangladesh in Nepal and Sri Lanka as well as winning the national championships.

Their success has not made the girls’ lives any easier. The team’s 13-year-old captain Maria Manda says she has to work part-time on her uncle’s farm to be able to afford the food she needs to stay healthy and strong enough to play.

“Kolsindur is a poor village,” says the head teacher of the local primary school Minoti Rani. “I wonder how long the support for the girls’ football team will last.”

For Tahura, dreaming of becoming her country’s top player, none of that matters. “I’ll never stop playing. I’ve become used to regular scolding from my family,” she said, adding she hopes one day to meet her namesake Messi. “I’d beg him to teach me some of his tricks,” she says of the Argentinian star.