Bannon Backs Away From Remarks That Drew Trump’s Ire 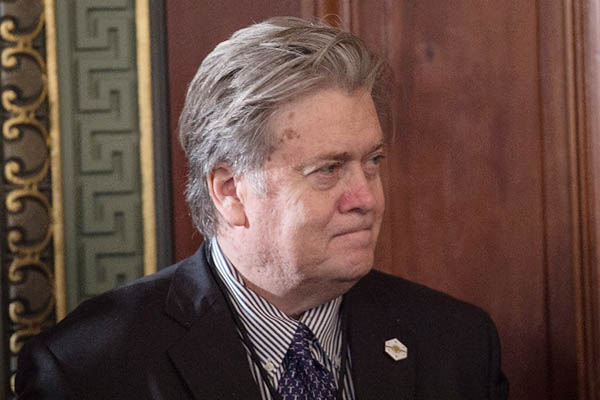 Former White House chief strategist claims his comments were directed at Paul Manafort, not any member of U.S. president’s family

Former Donald Trump adviser Steve Bannon on Sunday sought to back away from incendiary remarks quoted in an explosive new book that have landed him in hot water with the president he helped elect.

Bannon has found himself in dire straits since excerpts of Michael Wolff’s Fire and Fury: Inside the Trump White House—an explosive behind-the-scenes account that questions the president’s fitness for office—were first published on Wednesday.

He has been abandoned by financial patrons, condemned by erstwhile political allies and ridiculed by Trump himself over his reported comments in the book, which he has not denied making.

In the book, Bannon is quoted as saying a pre-election meeting involving son Donald Trump Jr. and a Kremlin-linked Russian lawyer was “treasonous,” and that prosecutors investigating possible collusion between the Trump campaign and Russia would “crack Don Junior like an egg on national TV.”

In a statement to the Axios news website, Bannon, who was a senior Trump adviser until he was ousted in August, said: “Donald Trump Jr. is both a patriot and a good man. He has been relentless in his advocacy for his father and the agenda that has helped turn our country around.” His criticism, Bannon said, was aimed at onetime Trump campaign chairman Paul Manafort, “a seasoned campaign professional” who “should have known [the Russians] are duplicitous, cunning and not our friends.”

But in Fire and Fury, Bannon is quoted as saying that “the top three guys in the campaign”—Manafort, Donald Jr. and Trump’s son-in-law Jared Kushner—attended the meeting he described as “treasonous.”

The closest Bannon came to an actual apology was saying he regretted the timing of his response. “I regret that my delay in responding to the inaccurate reporting regarding Don Jr. has diverted attention from the president’s historical accomplishments.”

Trump on Sunday continued his daily assault on Fire and Fury and its author, tweeting that the book—which paints him as disengaged, ill-informed and unstable, with signs of serious memory loss—was a “Fake Book, written by a totally discredited author.” A day earlier, seeking to refute Wolff’s suggestion that he lacked stability, Trump called himself a “very stable genius.”

Senior Trump policy adviser Stephen Miller treated the book derisively while insisting that his boss was in fact “a political genius,” in an interview with CNN on Sunday. Wolff, Miller said, “is a garbage author of a garbage book.” He assailed Bannon, reportedly a key source for the author, as “vindictive” and “out of touch with reality.”

Wolff defended his work on Sunday, telling NBC he “absolutely did not” violate any off-the-record agreements in his reporting but conceding, of the total three hours he said he spent with Trump, that the president “probably did not think of them as interviews.” He also portrayed a high level of concern in the White House over whether Trump risks being removed from office as unfit, as is possible—if difficult—under the constitution’s 25th Amendment.

Almost daily, he said, White House aides would say, “We’re not at a 25th Amendment level yet.”

Nikki Haley, the U.S. ambassador to the United Nations, rejected that notion, telling ABC that no one at the White House “questions the stability of the president.” She suggested that Wolff was someone who would “lie for money and for power.”

But Wolff insisted he did not enter the book project with an anti-Trump bias or agenda. “I would have been delighted to have written a contrarian account here: ‘Donald Trump, this unexpected president, is actually going to succeed.’ Okay, that’s not the story. He is not going to succeed. This is worse than everybody thought.”

Far from being detached and unable to deal with complex policy issues, Pompeo said, “The president is engaged, he understands the complexity, he asks really difficult questions of our team at the CIA.” He described Trump as an “avid consumer” of the agency’s intelligence.

Pompeo added that Trump was “completely fit,” saying it was “ludicrous” to suggest otherwise. But in a probable sign of White House sensitivities over the book, Miller lashed out in an unusually raw clash with his CNN interviewer, Jake Tapper.

Miller called Tapper “condescending” and “snide,” and accused CNN of engaging in “negative anti-Trump hysterical coverage” and “spectacularly embarrassing false reporting.” The two men repeatedly spoke over each other before Tapper declared, “I think I’ve wasted enough of my viewers’ time. Thank you, Stephen,” then turned away from Miller—who was still talking—to tersely announce the next guest.

Miller’s combative performance on CNN got a thumbs up from his boss. “Jake Tapper of Fake News CNN just got destroyed in his interview with Stephen Miller of the Trump Administration. Watch the hatred and unfairness of this CNN flunky!” Trump tweeted after the segment aired.