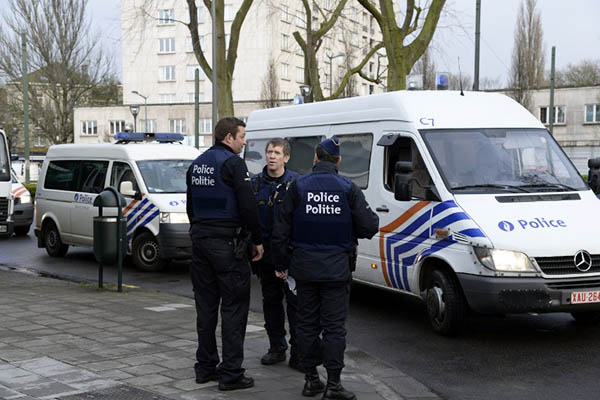 Mohamed Abrini among five people taken into custody over links to Brussels attack.

Paris attacks suspect Mohamed Abrini was arrested along with four other people in a series of raids Friday linked to the deadly Brussels airport and metro bombings, federal prosecutors said.

The arrests mark an important step in the investigation into the cell believed to have carried out both the Nov. 13 attacks that killed 130 people in Paris and the March 22 bombings that left 32 dead in Brussels. Both attacks were claimed by the jihadist group Islamic State based in Iraq and Syria, sending alarm bells across Europe.

The police operation in Anderlecht ended shortly before 11 p.m., according to media reports.

RTL television showed footage of what it said was likely Abrini’s arrest, with a man pinned down on the sidewalk by several armed plain-clothed police wearing facemasks and then being bundled into a grey civilian car.

Abrini, a Belgian of Moroccan origin, was seen at a petrol station north of Paris two days before the attacks with other top suspect Salah Abdeslam, who drove one of the vehicles used in the Nov. 13 bomb and gun assault across the French capital.

Abdeslam, whose brother Brahim blew himself up in Paris, fled back to Brussels immediately afterwards and was finally captured March 18 in the capital, just round the corner from his family’s home in the Molenbeek district. He is now awaiting extradition to France.

Immediately after the Brussels attacks there was intense speculation that Abrini was the third man seen on CCTV with the two suicide bombers at the airport shortly before they blew themselves up. The two bombers were identified as Ibrahim El Bakraoui and Najim Laachraoui, believed to be the bomb maker.

A police video released Thursday showed this third man, wearing a hat and light-colored jacket, fleeing the scene and making his way back on foot into central Brussels where he disappeared from view.

“At the moment, the investigators are verifying whether Abrini can be positively identified as being the third person present during the attacks in Brussels National Airport [Zaventem], the so-called ‘man with the hat’,” the spokesman said. He named the two other suspects arrested Friday as Osama K., who went by the alias of Naim Al Ahmed, and Herve B.M.

He said investigators were trying to determine if Osama K. was the man seen with Khalid El Bakraoui, the airport bomber’s brother, moments before El Bakraoui blew himself up in a subway station near the European Union headquarters. The spokesman said this second person was also filmed at a shopping mall in Brussels buying the bags used in the airport attacks.

In the wake of intense criticism that at one point made him offer to resign, Belgian Interior Minister Jan Jambon sent a tweet congratulating “all the police and security services as well as the prosecutors.” But he added: “The fight against terrorism continues.”

Critics say Belgium has not done enough to tackle Islamic radicalization as ever closer links emerge between the Brussels and Paris killings. They say Abdeslam must have had some help to have been able to evade police for four months and then only to be finally tracked down to his home base in Molenbeek.

Abdeslam says he had no knowledge of the Brussels attacks, according to his lawyer, despite having links to Khalid El Bakraoui. He also knew Laachraoui, who drove to Hungary with Abdeslam in September.

Making another link between the Brussels and Paris attacks, Salah Abdeslam had hired the car used to pick up Osama K. in Ulm in Germany and bring him to Belgium in early October, the federal prosecutor’s spokesman said. More links between the suspects have come to light following the arrest near Paris last month of Reda Kriket, who police said was planning an attack of “extreme violence” based on the arms and explosives found in a flat he used.

Two suspects in that case, identified as Abderrahmane A. and Rabah M, were remanded in custody in Belgium on Thursday, prosecutors said. Three other suspects held in connection with the Paris attacks, as well as Abdeslam himself, also had their detentions extended.

The Belgian authorities meanwhile kept the terror threat level at three, on a scale of one to four.