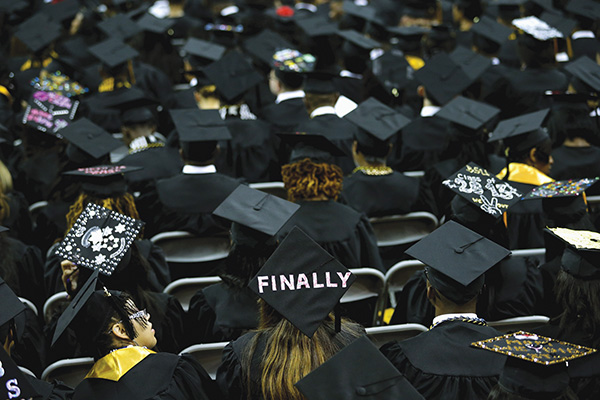 As mortarboards flew into the air at graduation ceremonies across the country over the past few days, students were left to ponder countless commencement speakers telling them to bravely seek a newer world, take risks, ignore naysayers, and generally emulate the ideal of the late Steve Jobs: “Don’t let the noise of other’s opinions drown out your own inner voice,” Jobs told the graduating class at Stanford University in 2005. All very inspiring, but how does one translate that into an actionable plan? Steve Blank at the University of California, Berkeley, has blogged some solid advice that any student, and certainly any entrepreneur, should take to heart. Blank runs a program for startup founders called Lean LaunchPad, and he fully embraces the idea that creativity and craziness go together. But he asks three fundamental questions: Are you really passionate enough to sustain your belief in your project? Once you have heard all the negative evaluations, can you actually explain why you still want to persevere? (Hint: stubbornness is not enough.) Will it change the world enough to make it worth all the pain? In other words, to paraphrase an old Paul Simon song, will you be still crazy after all these tears? If the answer is yes, then go for it.

Who’d have thought paleontologists were such prudes? Brian Switek, writing in Scientific American, says one reason we know so little about the sex lives of dinosaurs is “because studying the sexual behavior of animals was taboo historically.” The other reason, of course, is that the relevant parts are not preserved in stone (although there are a couple of 47-million-year-old turtles that were caught in the act). That’s a shame, because it turns out there are a lot of questions this line of inquiry might be able to answer. Earlier this month an article in Nature explored, at the molecular level, what it described as “a longstanding mystery in evolutionary biology,” that is, “How the chicken lost its penis.” The news is relevant for prying paleontologists because birds are among the closest living relatives of dinosaurs. With chickens and many reptiles, insemination occurs through what’s called a “cloacal kiss,” with no penetration. As for T-Rex sex, Switek is still pondering the evidence. Did the female lie on her side? Did the toothsome lovers back up to each other? “By subjecting old bones to new technologies,” he writes, “scientists will start to understand how the dinosaurs proliferated over their astonishing reign.”

During the decade that anthropologist Paula Sabloff spent doing field research in Mongolia, from 1993 to 2003, she watched the ancient land of Genghis Khan begin its transition from a totalitarian Soviet satellite to something else the people called democracy. But what did that mean to Mongolians? The answer was not the old Communist assertion of a “democratic republic.” (North Korea is still one of those.) But neither was it simply about voting, free speech, and the free press, as Sabloff’s American students tended to believe. No, the word the Mongolians kept repeating was “dignity.” Democracy meant they had the freedom to live anywhere. It meant they were in a better position to make money. It meant they had to be treated with respect. This is the critical lesson Sabloff took away from her research, as published in her recent book Does Everyone Want Democracy? But it goes well beyond Mongolia. The American failure to understand what dignity and democracy mean to the people of Afghanistan and Iraq is part of the reason the insurgencies in those countries grew and continue. When the local sense of dignity is lost to invasion, occupation, and corruption, American ideas of democracy simply are no substitute.

When comedian Bill Maher talks about dope—using it, abusing it, legalizing it—most often he’s only half joking. And recently he made a very serious point indeed. Legalizing marijuana has become “the next civil-rights issue,” he said. Maher was riffing on a just-released report by the American Civil Liberties Union: “The War on Marijuana in Black and White.” Between 2001 and 2010, police made 8 million marijuana arrests, and 90 percent were for simple possession. Blacks were picked up at almost four times the rate of whites, and in some areas at eight times the rate, even though usage is about the same on each side of the racial divide. The ACLU deplored the billions of dollars wasted on a failed and racially biased policy that sucks otherwise innocent people into the criminal-justice system, crowds the jails, and has not reduced marijuana use or availability. But Maher went a step further. And, again, he was only half joking. He called this pattern of arrests “a subtle way to suppress the black vote,” because 48 states limit voting rights for convicted felons. “Only two states do not,” said Maher: “Maine and Vermont, and Maine’s black population consists of a bear.”

Whether it’s a terrorist bombing or cops with pepper spray, an Arab uprising or a politician’s blooper, current events today are recorded from countless angles on smartphone cameras. Some images are unreliable or faked; sometimes investigators are overwhelmed with evidence. But several new projects are trying to make sense of this visual cacophony. The human-rights organization Witness is helping develop an app called InformaCam that not only embeds geographic and time data in videos but signs them and encrypts them for storage on a secure server. Such evidence could prove vital, for instance, in the prosecution of Syrian war criminals. The Rashomon Project, meanwhile, takes its name from the classic Japanese movie about a murder seen through the eyes of four different witnesses. The Rashomon online toolkit generates a synchronized timeline from multiple images and videos, allowing an event to be viewed from as many angles as there are smartphones. This may sound like so much more Big Brother watching you, but there’s a twist. These tools are for the public, says Camille Crittenden at the Center for Information Technology Research in the Interest of Society, so “armchair investigators” can be watching Big Brother, too.

The Taliban’s Life of Luxury