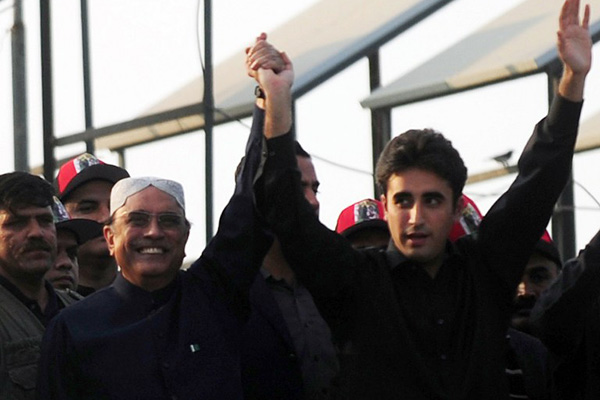 At 24, Bilawal Bhutto Zardari is too young to run in Pakistan’s general elections, but he carries both the hopes of a party and the bloodstained mantle of his family history.

Bilawal Bhutto Zardari was 19 and a student at Oxford University when his mother, Benazir Bhutto, was assassinated, on Dec. 27, 2007, and he had the chairmanship of her Pakistan Peoples Party thrust upon him. After maintaining a relatively low profile for several years, Bilawal launched his political career with an impassioned speech at the family mausoleum in Sindh on the fifth anniversary of her death.

“Bhutto is an emotion, a love,” he told over 200,000 supporters of the party founded by his grandfather Zulfikar Ali Bhutto, the charismatic premier deposed and hanged by military dictator Gen. Zia-ul-Haq in 1979. “Every challenge is soaked in blood … However many Bhuttos you kill, more Bhuttos will emerge from every house.”

Though Bilawal will not be old enough to run for Parliament until September, his face adorns PPP election posters and TV adverts, framed between Zulfikar and Benazir, both former prime ministers. The PPP endlessly eulogizes the dead Bhuttos as martyrs to the common man’s struggle against oppression, but the threat of a Taliban attack means Bilawal has barely been seen in public in the run-up to the May 11 vote.

His only significant appearances so far came with his father, President Asif Ali Zardari, in a bizarre middle-of-the-night gathering on April 4 that was originally billed as a major rally to jumpstart the PPP campaign for reelection, and in a subsequent video message in which he attacked the rival Pakistan Muslim League (Nawaz).

In the former, Bilawal appeared uncomfortable as he addressed the small crowd haltingly, in choppy Urdu, a far cry from the practiced polish of his December speech. And he implored party loyalists to support his aunt, Zardari’s sister Faryal Talpur who is running the day-to-day affairs of the party. In the latter, the Urdu wasn’t much improved and Bilawal shrilly dismissed the work done by the PMLN during its five-year term in the Punjab province.

Perhaps more damningly for the leader of a center-left party, some PPP faithful have been disappointed by Bilawal’s failure to meet and charm the ordinary voter—something that came naturally to his mother and grandfather.

Given the rise over the past two years of cricket legend Imran Khan’s Pakistan Tehreek-e-Insaf party, with its energetic youth wing, Bilawal’s age is an asset for the PPP as it seeks to appeal to young voters—who represent almost a third of the 86.2 million registered voters. The freshness represented by Bilawal is also important in light of the corruption scandals that have plagued Zardari, and indeed Benazir.

In her autobiography, Benazir said Bilawal’s birth was met with celebratory gunfire outside her hospital and cries of “Jiye Bhutto!” (“Long live Bhutto!”). With no other obvious leader emerging in the PPP, the young man whose name means “one without equal” looks likely to carry on the political legacy bequeathed to him by his mother and grandfather—whether he wants to or not.