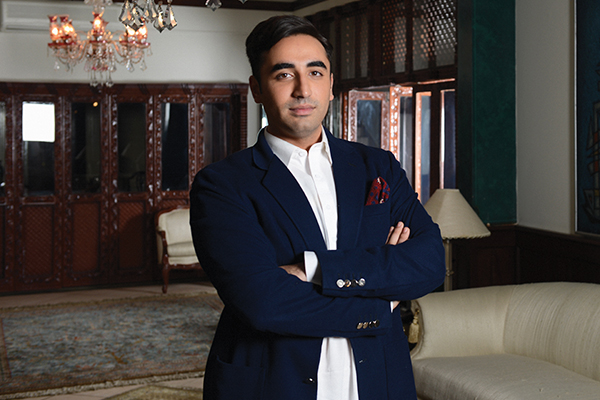 PPP chairman announces he will contest polls from NA-207 and dismisses reports of ‘Sindhi Taliban.’

Bilawal Bhutto Zardari, the chairman of the Pakistan Peoples Party, announced on Monday that he would contest Pakistan’s next general elections from Sindh.

“I will contest the general elections from NA-207,” he told party workers at a ceremony to send 50 trucks of aid to the flood-affected residents of Punjab province. The 25-year-old son of former president Asif Ali Zardari and assassinated prime minister Benazir Bhutto said the nation had to unite at this time of crisis.

“The country is facing a horrible situation arising from floods that have destroyed entire towns in Punjab,” he said, adding, “The entire nation must unite to help internally displaced persons and victims of floods.” Zardari also criticized anti-government protesters in Islamabad for refusing to postpone their sit-ins in light of the natural disaster. “Continuing sit-ins under these circumstances is not a public service; it is just a means to satisfy your own ego,” he said.

Cricketer-turned-politician Imran Khan and populist cleric Tahir-ul-Qadri have been leading protests against the government since Aug. 15, alleging it won the 2013 general elections through rigging. Zardari said the protesters’ demands were unconstitutional.

“You cannot allow anyone with a stick to ask a sitting prime minister to resign,” he said. “This is impossible in the presence of the Constitution.”

Zardari also praised the Punjabi Taliban’s decision to renounce violence in favor of preaching in Pakistan a “positive sign,” but cautioned the government against complacency. “Just because they have renounced violence does not mean we should forget their past actions,” he said. “I once again ask the government and the Taliban to ensure the speedy release of Ali Haider Gilani,” he added.

Gilani, the son of former prime minister Yousaf Raza Gilani, was abducted by the Taliban during the 2013 election campaign. He and Shahbaz Taseer, the son of assassinated Punjab governor Salmaan Taseer, remain in the militants’ custody.

“Nobody should be allowed to spread terrorism in this country and all matters should be dealt with in accordance with law,” said Zardari. He also dismissed reports that the Sindh chapter of the Tehreek-e-Taliban Pakistan had participated in last week’s attack on a Naval Dockyard in Karachi that left one soldier dead. “There are no Sindhi Taliban in Sindh province,” he said. “Sindh is a land of Sufis and I find this phrase, ‘Sindhi Taliban,’ beyond understanding.”

Best wishes to him.