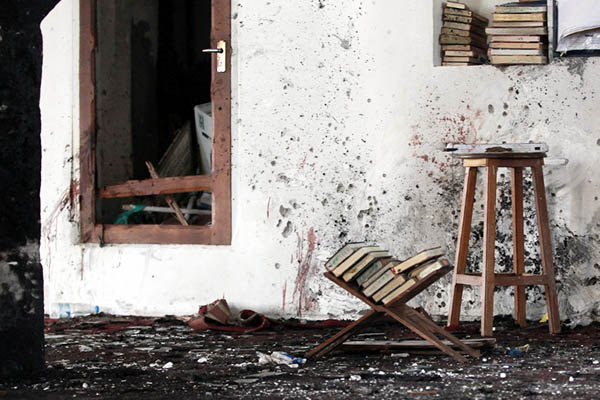 The militant group targeted Shia mosques and offices in Sanaa.

At least 31 people were killed Wednesday and dozens wounded in five simultaneous bombings claimed by the Islamic State group at Shia mosques and offices in the Yemeni capital, medics and witnesses said.

I.S., a Sunni Muslim radical group, said the attacks were in “revenge” against the Shia Houthis, who have overrun Sanaa and much of the Sunni majority country and whom it considers to be heretics.

The attacks came as the United Nations struggled to push forward peace talks between Yemen’s exiled government and the Iran-backed rebels in Geneva. They also come almost three months after I.S. carried out multiple bombings against Shia mosques, killing 142 people.

Two car bombs targeted mosques, while a third hit the house of the head of the Houthi rebels’ politburo, Saleh al-Sammad, witnesses and security officials said. The I.S. statement said the nearby politburo office was the target.

One of the car bombs targeted the house of Houthi leader Taha al-Mutawakel and the adjacent Al-Hashush mosque, which was targeted in the March bombings. The other car bomb hit the Al-Quba Al-Khadra mosque in the central Hayel district, which is frequented by Houthi supporters. Bombs also went off at two other mosques—Al-Kibssi and Al-Tayssir in Al-Ziraa district, with all the attacks timed to coincide with Muslim sunset prayers.

Witnesses said the bombs were planted near the entrances to the mosques, and exploded as worshippers flocked in for the prayers, on the eve of the Muslim fasting month of Ramzan.

At the time of the March bombings, an I.S. statement described the attacks as “just the tip of the iceberg.” That carnage drew widespread condemnation, including from I.S. rival Al Qaeda, whose affiliate in Yemen issued a statement saying it had nothing to do with the bombings.

The Houthis overran Sanaa in September and have since expanded their control across several regions, aided by troops loyal to former president Ali Abdullah Saleh. They pushed U.N.-backed President Abedrabbo Mansour Hadi into exile after advancing in March onto his refuge in Aden, triggering ongoing battles with southern fighters.

In March, Saudi Arabia assembled an Arab coalition that launched an air campaign against the rebels. On Wednesday, the United Nations was struggling to get peace talks in Geneva moving, with the two sides accusing each other of trying to sabotage the process.

In other unrest, nine people were killed and 76 wounded, including civilians and southern fighters in rebel bombing of three Aden neighborhoods, the local health authority said. Clashes on the northern and western outskirts of Aden continued, while coalition warplanes intervened in support of southern fighters defending the city, an official said.

Meanwhile, the humanitarian and health situations in the port city keep deteriorating. Most resident have no access to basic treatment for diseases caused by poor hygiene, such as malaria, typhoid and dengue fever, which are spreading fast across the city. “The situation is precarious and sanitary conditions are deplorable, particularly after the spread of infectious diseases in Aden,” said Saleh al-Dubahi, head of the epidemiological surveillance service for dengue fever at Al-Breihi hospital. “The situation is very serious and could become catastrophic if someone doesn’t intervene quickly. Cholera, typhoid fever and diarrhea could soon wreak havoc and increase people’s suffering,” he added.