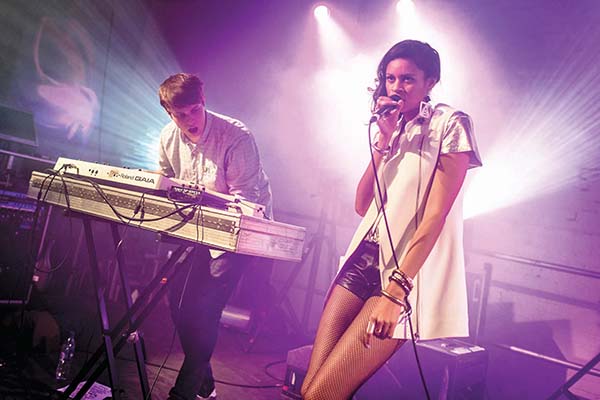 AlunaGeorge’s music—with its combination of electropop beats, Aluna Francis’s sweet voice, and lyrics like “Our bodies making music baby/I wanna do it again”—is overwhelmingly sensual. Comprising vocalist Francis and producer George Reid, the duo has gained recognition and accolades in the U.K. for their hit single “Attracting Flies” and recent collaboration with Disclosure, another British electronic duo. Their single caught the attention of Spin, Fader, and Pitchfork. Since AlunaGeorge was voted the No. 2 band on the BBC’s Sound of 2013 poll, listeners have been in a waiting game for more.

Their influences range from Mariah Carey to Destiny’s Child to producer-rapper Flying Lotus. The couple’s musical relationship started on MySpace, where Reid reached out for permission to remix a track from Francis’s band, My Toys Like Me—a synthpop quartet that gained recognition back in 2009. The once total strangers have now made Body Music, their debut album, a record of electropop sounds mixed with hip-hop, dub step, and musical samplings.

Having just come off playing to a “mind-blowingly full” crowd at the Glastonbury Music Festival, AlunaGeorge is heading stateside for the first time this month. Newsweek spoke with them about working as a twosome, playing with Kendrick Lamar, and making music you can enjoy in bed but also at a warehouse party. Excerpts:

What kind of music did you want to put out on this album? Were you influenced by R&B?

Francis: We really didn’t have any expectations. We just got in the studio and started working. We had different influences and were trying out different types of music, writing as many songs as we could. Eventually we figured out what we were better at doing.

Reid: The album is the pairing of Aluna’s vocals with hip-hop-inspired beats. It’s actually quite traditional.

How is the music-making process as a twosome? Would you ever add another member?

Francis: We already have a lot of influences and stuff that we navigate through with each other. We have a good time together.

Reid: The reason we have a good time and the reason we can make music together is because we complement each other really nicely. We’ve found something in each other that feels unique.

Your record is called Body Music. Did you intend to make such a sensual album?

Francis: It’s funny you say that because we wrote the song “You Know You Like It” in George’s bedroom, which is painted pink, and I was in a bath towel singing all by myself. We just kept laughing because it was not sexy at all, but it ended up being this sexy song. “Body Music” is also a sexy track in its lyrical content. It has a beat that makes your body move; that kind of went throughout the album. When I’m watching people dance in the audience live, even the guys are moving their hips.

Which track do you think is going to be the most attractive to listeners on your record?

Reid: All of them I hope. I think my favorite is “You Know You Like It.”

Who are your musical idols?

Francis: We both really love Radiohead. That’s how we came together musically.

Would you guys ever do a remix of their song or perform with Radiohead?

Francis: They’re kind of legends, so we don’t expect to ever get anywhere near them. I actually don’t believe they exist as real people.

Do you take from personal experiences when you write music?

Francis: They are all personal stories: either my stories, George’s stories, or our stories combined. They are all quite honest stories as well. I’ve done it on purpose. I want a certain kind of clarity in the lyrics.

Reid: We saw [rapper] Kendrick Lamar at Glastonbury, when we played there. I haven’t seen anything that good live in a long time. It blew me away.

Francis: Glastonbury will eat you up and swallow you whole. It was mind-blowingly full. People were having so much fun, and we were getting so much positive feedback on our music.