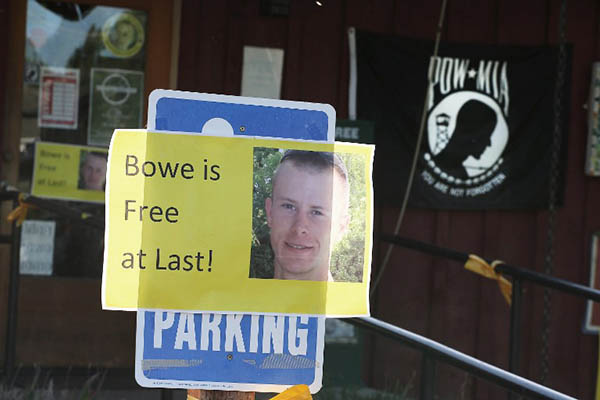 Ex-POW captured in Afghanistan airs his side of the story in podcast Serial.

The U.S. soldier who was held five years by Taliban-linked insurgents says he walked off his base in Afghanistan in a stunt to prove he was like fictional CIA movie spy Jason Bourne.

Sergeant Bowe Bergdahl abandoned his outpost in eastern Afghanistan in June 2009. He was captured almost immediately and released in May 2014 in a controversial swap for five Taliban detainees held at Guantanamo Bay. He is currently an active soldier with a desk job in Texas while the military decides whether to put him on trial for desertion and “misbehavior before the enemy” that could see him jailed for life.

In telephone calls with Hollywood screenwriter Mark Boal, who wants to make a movie about Bergdahl, he recalled the horrors of captivity and what motivated him to walk off base. Excerpts of those calls have been released in partnership with U.S. hit podcast Serial, which returned Thursday with a second season devoted to Bergdahl’s story—why he walked off base and the consequences.

“Doing what I did was me saying I am like Jason Bourne,” Bergdahl told Boal, referring to the CIA assassin played by Matt Damon in a string of Hollywood action thrillers. “I had this fantastic idea that I was going to prove to the world that I was the real thing, that I could be what it is that all those guys out there who go to the movies and watch those movies, they want to be that.”

Serial, a mix of investigative journalism and first-person narrative, has interviewed former soldiers deployed with Bergdahl and promises that the second episode will present the Taliban’s version of events.

The 29-year-old was detained by the Taliban-linked Haqqani network and is the only American in uniform held by insurgents in Afghanistan. He said he was held in basement-style rooms with no light.

“There’s times when I’d wake up and it’s just so dark, like I would wake up not even remembering what I was,” he said. “It’s like you’re standing there screaming in your mind. You’re standing in this blackened, dirt room that’s tiny and just on the other side of that flimsy wooden door, that you could probably easily rip off the hinges, is the entire world out there—it is everything that you’re missing.”

Bergdahl told Boal that his original plan was not to go missing, but trek to another military base to draw attention to what he called a failure in leadership in his unit. He wanted to create a “Dustwun”—the radio signal for duty status whereabouts unknown—that would scramble the military and the CIA so that when he returned, he might be able to get the ear of a general. It was “gutsy but still stupid,” he said.

In preparation he mailed his books, journal, laptop and Kindle e-reader home, purchased a local Afghan outfit and withdrew $300 in U.S. and local currency in case he needed to bribe someone.

If a trial goes ahead, military prosecutors will seek to prove that Bergdahl had a duty to defend a unit or place, and endangered his fellow soldiers by failing to uphold his duty.

Off base, Bergdahl quickly realized he was in a lot of trouble. “Twenty minutes out, I’m going, ‘Good grief, I’m in over my head’.” He decided to mitigate the “hurricane of wrath” he would face by gathering intelligence, so he modified his plan, hoping to track insurgents planting roadside bombs and return with this information as a “bonus point.”

But moving across the terrain at night, he went dramatically off course, putting him in open desert with no cover when the sun came up. He said he was spotted by six or seven guys, armed with AK-47s and traveling on motorcycles. He denied reports that he tried to resist.

“They pulled up and that was it,” he said. “I’m not stupid enough to try and knife off a bunch of guys with AK-47s.”

The first season of Serial was a blockbuster hit that resulted in a Maryland court giving its subject, a man convicted of murdering his girlfriend in 1999, a chance to appeal his sentence. Episodes of the first season were downloaded millions of times on the Apple iTunes store. The second season is available at serialpodcast.org.