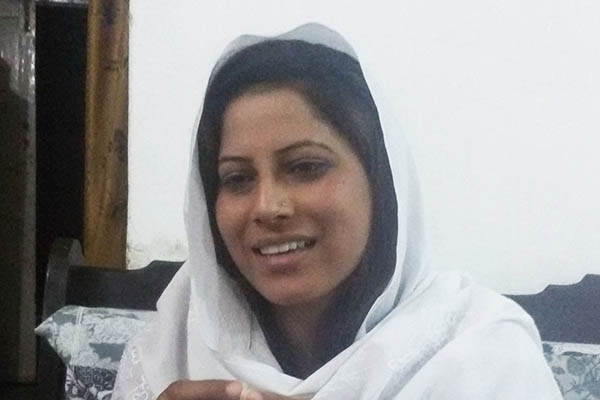 A 25-year-old Christian resident of Swat Valley is making waves after becoming the first minority woman to contest elections in a northern region that was controlled by the Taliban as recently as six years ago.

“I’ve always wanted to work for society’s downtrodden, regardless of religion or creed,” says 25-year-old Patras from her home in Mingora, also the birthplace of the world’s youngest Nobel laureate, Malala Yousafzai. “I’m a citizen of Pakistan. I hold a CNIC card like other citizens of this country,” she says, adding that she hopes to overcome her “minority” tag with these elections. “Whenever I meet Swat’s people, my heart breaks upon hearing of their plight. I want to be their voice” regardless of whether or not they are Christian, she added, noting the leftwing Awami Workers Party on whose ticket she is contesting the polls is also dedicated to equal rights for all.

Patras’ views are a far cry from those of Mullah Fazlullah, the militant commander who virtually ruled Swat Valley after signing a “peace” agreement with the government in 2008. Under his rule, girls in the region were barred from attending school or visiting bazaars without male relatives, let alone participating in any political activity. Patras’ family was among the over 2 million people that fled the region for safety in what she describes as the “worst” time of her life. But while a Pakistan Army operation in 2009 rid the area of the militant scourge, problems remain and Patras hopes she can help overcome them if she secures victory as district councilor of Saidu Sharif. Patras especially wants to focus on minority’s rights, women’s rights, and education—a goal she hopes to highlight with her electoral symbol of a light bulb, signifying knowledge and enlightenment.

“I want to establish an institution where impoverished children, who cannot even afford their school tuition, can receive quality education and become active citizens of society,” she says. The 25-year-old postgraduate in Sociology says she is most concerned about child marriages, forced marriages, and the settlement of disputes through vani. She also wants to build a church and a Christian cemetery for her minority community.

Patras isn’t the only minority woman to be contesting local elections in Khyber-Pakhtunkhwa this year. Koshiala Rani, 37, is a Hindu mother of three. “I want to serve minorities,” she says of her decision to contest the general counselor seat in Lower Dir. Rani hopes to build a community hall for the minority community “so that we have a gathering place during joys and sorrows.”

Swat-based journalist Niaz Ahmed Khan says Patras and Rani’s decision to contest elections is a welcome step for regional politics. “It is a good omen for minority communities. They are setting a good example for the future generation,” he said. Patras agrees, hoping her campaign will prove the region’s minorities are willing to fight for their rights. “Thanks to our security forces, women have returned to schools and colleges without any fear,” she said, adding Pakhtun icons such as Malala Yousafzai, Shad Begum and Tabassum Adnan are great sources of pride.

However, the situation is far from perfect. “It was a tough decision to join politics,” Patras says. “My relatives—especially my brother—begged me to withdraw my nomination as they believe society isn’t liberal enough to accept a woman in power. However, my immediate family, especially my mother, have encouraged me and allowed me to reach this point.”

Despite all her efforts, Patras is aware that she has a tough road ahead—although she is not letting that get her down. “Whether I win or lose, I’ll remain undeterred. I’ll continue the struggle for human rights.”

Blasphemy: The State’s Dance of Death