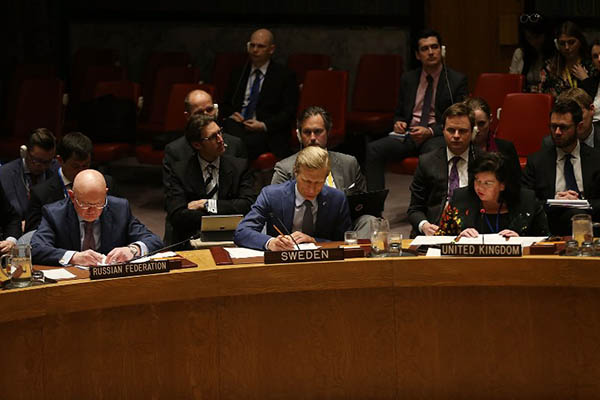 Britain accused Russia on Wednesday of breaking the two-decade international ban on chemical weapons, at emergency talks on last month’s poisoning with a nerve agent of a former Russian spy.

The accusations came as diplomats from the Organization for the Prohibition of Chemical Weapons met behind closed-doors in The Hague to discuss the crisis.

OPCW experts last week confirmed the British findings that former Russian double agent Sergei Skripal and his daughter had been made ill by a nerve agent. Founded in 1997, the OPCW oversees the application of the Chemical Weapons Convention (CWC) aimed at eliminating the world’s stockpiles of toxic arms.

“We will continue to call out Russia’s reckless and indiscriminate behavior when it violates this Convention, and when it threatens global security,” British ambassador Peter Wilson told the OPCW.

Called by Britain, it was the second meeting of the body’s executive council in three days. After deploying its experts in Salisbury, the OPCW last week confirmed in a report “the findings of the United Kingdom relating to the identity of the toxic chemical.” It did not however publicly name the substance nor its origins, which Britain says was a Novichok nerve agent of the sort first developed in the Soviet Union in the 1970s.

Moscow has vehemently denied the allegations, saying the OPCW results were manipulated and had failed to disclose the presence of the BZ nerve agent, used by the West, in biomedical samples taken from the Skripals.

Russian ambassador to the Netherlands Alexander Shulgin told a late night news conference that the British version of events was “a story woven with lies” with Britain “trying to fool everyone.” The British envoy Wilson hit back however, telling reporters: “BZ wasn’t in the samples, they [the OPCW] were testing. It was in the control samples, meaning that the laboratories were doing their job.”

And he accused the Russians of breaking confidentiality agreements by revealing the name of a Swiss lab. “Either the Russians are hacking the laboratories or they are making stuff up,” Wilson told reporters.

OPCW chief Ahmet Uzumcu refused to be drawn into the war of words, but offered reassurances of “the credibility and integrity of this network” of laboratories around the world analyzing samples.

At a U.N. Security Council meeting in New York also called by Britain, Russian Ambassador Vassily Nebenzia stressed that the OPCW analysis had not linked the nerve agent to Russia and insisted London was spreading “the same baseless allegations.” British Ambassador Karen Pierce argued that Russia had yet to provide an explanation to London to clear Moscow of any involvement. “Our questions remain unanswered,” she said.

The Salisbury crisis, coupled with Russian support for its ally Syria after accusations of illicit toxic weapons being used on civilians in its civil war, has sent already-frayed relations between Moscow and the West plummeting to new lows. On Monday, the OPCW’s governing executive council also discussed a dangerous mission by its inspectors to the Syrian town of Douma to probe an alleged poison gas attack on April 7.

The mission had been due to start on Wednesday, but it was again stalled after U.N. security services came under fire there on Tuesday.

Uzumcu said he did “not know when” the inspectors would be able to deploy, and warned it would only happen if the team had “unhindered access” to the sites.

Sergei Skripal, 66, remains in hospital, though he is improving rapidly and no longer in a critical condition, doctors said in their last update on April 6. Yulia Skripal, 33, who had been visiting her father in England when the attack took place, has been discharged and is continuing her recovery in a safe house.

British television regulator Ofcom said it was investigating “potential breaches” of the country’s broadcasting code by Russia’s RT channel. Several British M.P.s have called for it to be shut down, accusing it of being “a propaganda mouthpiece for the Russian state.”

SSGC Warns of Gas Shortage in Pakistan During...