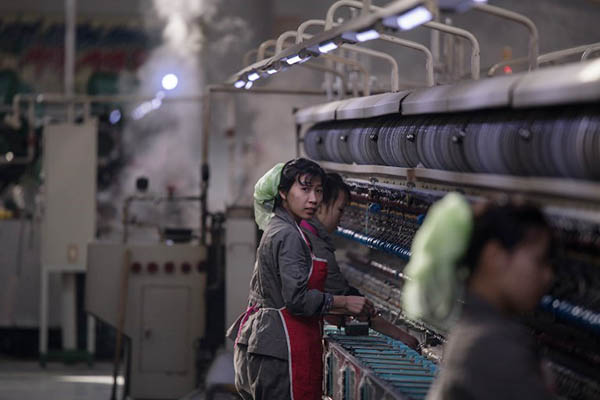 Britain wants new U.N. sanctions against North Korea that would target guest workers sent mostly to Russia and China, and whose wages are a source of revenue for Pyongyang, the British ambassador said on Wednesday.

The U.N. Security Council on Tuesday unanimously condemned North Korea after it fired a missile that flew over Japan’s main islands, but it did not specify whether it would impose new sanctions. British Prime Minister Theresa May is expected to discuss possible new measures during talks in Tokyo on Wednesday with Prime Minister Shinzo Abe, Ambassador Matthew Rycroft said.

“We think that the time is right to consider further constraints on the DPRK regime, given that the constraints that we put in place so far have clearly not yet got them to change course,” Rycroft told reporters. The council should consider “whether we could do more to prevent the flow of money coming into DPRK from North Korean nationals who are working abroad,” he said.

In its latest sanctions resolution adopted on Aug. 5, the council froze the number of work permits for North Korean foreign workers whose earnings provide hard currency for Kim Jong-Un’s regime.

U.N. human rights investigators estimate that more than 50,000 North Koreans have been sent abroad, generating between $1.2 billion and $2.3 billion per year. Most of the laborers are working in Russia and China, employed in construction, mining, logging and textile industries, according to U.N. officials.

China’s Foreign Minister Wang Yi said Beijing was working with other council members on a response to the latest missile launch over Japan. It remained unclear whether the United States, which is tasked with drafting resolutions on North Korea at the Security Council, would submit a new proposal.

Washington negotiated with China, Pyongyang’s ally and main trading partner, for a month to reach agreement on the latest sanctions banning exports of coal, iron, lead and seafood.

During a closed-door meeting on Tuesday, Russia and China again argued that sanctions would not resolve the crisis over North Korea’s missile and nuclear tests, and that talks were needed, a council diplomat said.

Japan’s Ambassador Koro Bessho said Tokyo would be pushing the United States to seek new punitive measures that he suggested could build on the current sanctions. “I don’t really think we have to invent something really new but we will certainly discuss it with the United States,” said Bessho.