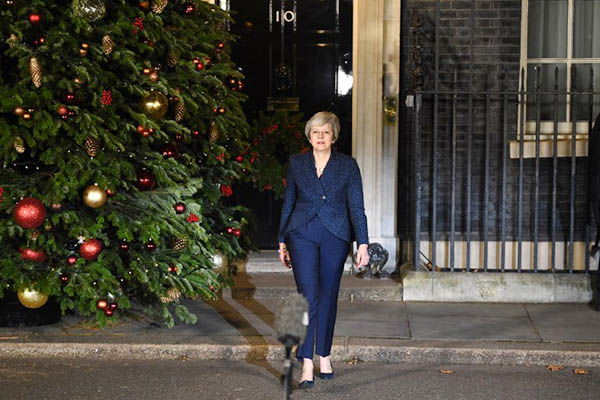 Theresa May avoids threat of a general election after conservative M.P.s vote 325 to 306 in her favor

British Prime Minister Theresa May’s government saw off a vote of no confidence in parliament on Wednesday, called after M.P.s overwhelmingly rejected the Brexit deal.

Main opposition Labour leader Jeremy Corbyn called the vote after Tuesday’s crushing defeat for May—but her Conservative M.P.s rallied behind her and the government won by 325 to 306, heading off the threat of a general election.

“This house has put its confidence in this government,” May told M.P.s immediately after the vote in parliament’s lower House of Commons. “I stand ready to work with any member of this house to deliver on Brexit and ensure that this house retains the confidence of the British people.” She also said she would “continue to work to deliver on the solemn promise we made to the people of this country to deliver on the result of the referendum and leave the European Union. “I believe this duty is shared by every member of this house. And we have a responsibility to identify a way forward that can secure the backing of the house.”

She also invited opposition leaders to meet with her for Brexit talks—starting immediately on Wednesday. “I would like to invite the leaders of parliamentary parties to meet with me individually and I would like to start these meetings tonight,” May said. “The government approaches these meetings in a constructive spirit and I urge others to do the same. But we must find solutions that are negotiable and command sufficient support in this house.”