Imran Khan Blames another Conspiracy for Rifts between PTI, Army 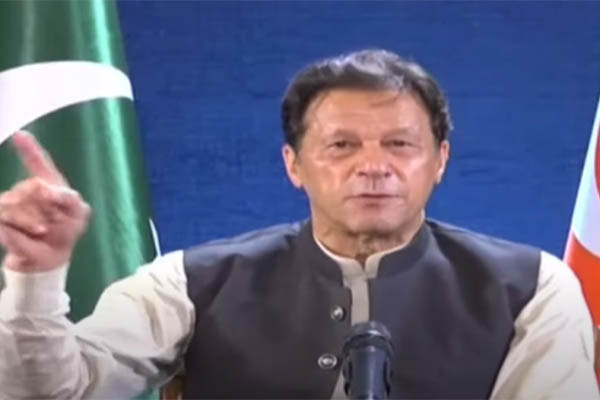 Pakistan Tehreek-e-Insaf (PTI) Chairman Imran Khan on Wednesday alleged yet another “conspiracy,” claiming the ruling coalition had “plotted” to cause rifts between his party and the Pakistan Army.

In a video statement, the ousted prime minister reiterated his claims of the incumbent government conspiring “against the biggest party in Pakistan.” Alleging that the present rulers had “issues” with the “same page” of the PTI and the Army, he said Israel and India had been the most joyous over his government’s ouster through a “foreign conspiracy.”

Recalling that his government had exposed the EU DisinfoLab campaign that had revealed India’s plots against Pakistan, he alleged that the “current government was also part of the disinformation campaign against the country.” Claiming this conspiracy was “extremely dangerous,” he reiterated allegations of it having been imposed through external forces.

“Today, it’s being said that we are against the Army and now they’ve [government] become the patriots who are calling us traitors,” he said, adding that he care about the country and it needs a strong Army to survive.

Addressing the recent arrest of his chief of staff, the PTI chairman said Shahbaz Gill should be given a chance to clear his position in court. “Gill should be charged if he has said anything that goes against the law,” he said, offering neither a full-throated defense nor a denunciation of Gill’s TV statement in which he appeared to incite officers of the military to mutiny against their superiors.

On the PTI’s prohibited funding case, Khan reiterated that it was “baseless.” Claiming that the party had provided the Election Commission of Pakistan (ECP) with the names of 40,000 donors, he accused rival parties of failing to prove how they had received their funding. “In fact, they don’t have an audit report, no donors, so where do their funds come from?” he questioned. “Despite a court order to investigate other parties’ cases, it was only the PTI that was put under a trial,” he said, without acknowledging that the PTI’s case spanned 8 years while the other parties’ cases are roughly 2-3 years old.

Referring to another case against him—that of purchasing and selling gifts from the Toshakhana without declaring the profits on his annual statements—Khan sought to deflect by saying all high-ranked government officials received gifts. “Asif Zardari took three cars from the Toshakhana while Nawaz Sharif took one car,” he said of the cases pending against them. He said everyone, including the Army chief, should be investigated for the gifts they had received.

Accusing the government of trying to malign his reputation, he confirmed reports that his party leaders were being threatened by the banned Tehreek-e-Taliban Pakistan (TTP). Voicing yet another alleged conspiracy, he claimed the TTP’s rise in Khyber-Pakhtunkhwa was part of efforts to isolate his party. “The TTP has issues with the U.S. Why should it target our government that desires real independence,” he questioned.

The ousted prime minister concluded his speech by once again calling for free and fair elections to steer the country out of its prevailing crises.

Responding to Khan’s speech, Information Minister Marriyum Aurangzeb told a press conference that the PTI chief was trying to divert public attention from his party’s prohibited funding case by running a malicious campaign against the Army on social media.

Accusing Khan and his wife, Bushra Bibi, of directing the PTI’s social media teams to troll the Army’s top leadership and its martyrs, she alleged the recent social media campaign had been on their direct orders. She said that the trolls who were nabbed by authorities had admitted that the campaign was run on the directives of the PTI leadership.

Referring to Gill’s statement, she claimed Imran Khan was playing a “dangerous game” as calls for mutiny in the Army’s ranks was a red line that nobody would be allowed to cross. “Enough is enough,” she said, emphasizing “zero tolerance” for anyone who tried to incite division within state institutions, or spread chaos and anarchy in the country.

Aurangzeb said Imran Khan was reaping what he had sown in politics i.e. hatred and animosity. “No patriot can even think of trolling the Pakistan Army soldiers and officers who sacrificed their lives while carrying out rescue and relief activities in the flood-hit areas,” she said and chided the former prime minister for not offering his sympathies to flood-affected people, as his wife had “barred” him from attending any funerals or visiting places where deaths occurred.