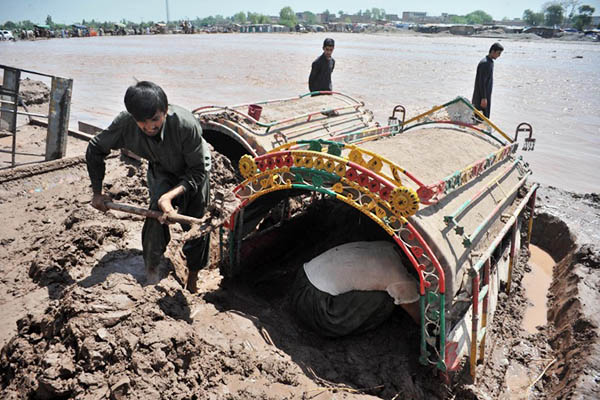 Rescuers in Pakistan are searching for 23 people trapped by landslides.

Rescuers were struggling on Wednesday to reach 23 people buried by a landslide in the north after heavy rains on the weekend that authorities said have killed at least 92.

National disaster management authorities said more than 1,200 houses have been damaged since April 2, with roads across the mountainous north blocked. Communications have been knocked out across much of the region, making it difficult to tell how many people are still stranded, amid fears the toll could still rise.

Authorities in Khyber-Pakhtunkhwa province said they are still battling to reach the 23 buried by the landslide in Kohistan district on Monday. Five injured people and two dead had been pulled from the rubble over the last two days.

Rescuers were also searching along the northern Karakoram Highway for travelers trapped by rockfalls. “We fear some casualties as some passengers might have came under landslides. There are dozens of other passengers stranded on Karakoram Highway without food and shelter,” said a spokesman from the chief minister’s office. He said six people had managed to travel on foot for three days, reaching Gilgit on Tuesday, and they described the situation as “horrible.”

The death toll across the province was 64, officials said.

Neighboring Gilgit-Baltistan region was the worst hit with roads blocked by landslides in every district and more than a dozen foreign tourists trapped in the Hunza valleys, a disaster official said. Medical teams were unable to reach upper Hunza, with an official there describing the situation as “alarming.”

The military said that troops were working 24 hours to restore communications and clear roads in Khyber-Pakhtunkhwa and Gilgit-Baltistan.

In Pakistan-administered Kashmir local government official Hameed Kayani told AFP that most foreign tourists had been evacuated from the scenic Neelum Valley, adding that authorities were clearing the main road.

Poorly built homes across Pakistan, particularly in rural areas, are susceptible to collapse during the annual spring rains, which are often heavy. Severe weather in recent years has killed hundreds and destroyed huge tracts of prime farmland.