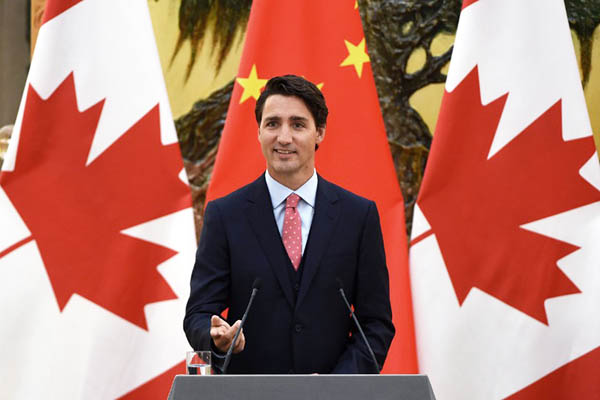 Canada will apply to join the China-backed Asian Infrastructure Investment Bank (AIIB), Ottawa’s finance department said on Wednesday, in a coup for Beijing after Washington had tried to dissuade U.S. allies from signing up.

“Canada is always looking for ways to create hope and opportunity for our middle class as well as for people around the world,” Finance Minister Bill Morneau said in a statement issued in Beijing. “Membership in the AIIB is an opportunity to do just that.”

The Beijing-headquartered multilateral lender, which began operations earlier this year, has been seen by some as a rival to the World Bank and the Philippines-based Asian Development Bank, which was founded in 1966.

The $100 billion AIIB counts several major European countries among its shareholders after they joined up despite the objections of the United States, which remains by far the world’s largest economy and hosts both the World Bank and International Monetary Fund.

Critics feared the new bank would set much lower standards for projects and undermine principles of social, environmental and economic sustainability adhered to by the World Bank and other multilateral development finance institutions.

AIIB President Jin Liqun welcomed Canada’s decision, which he called “a vote of confidence” in the institution that showed Ottawa’s “confidence in the strong foundations the bank has built in our first few months.”

The U.S. and Japan—the world’s third-largest economy—have notably declined to join the AIIB. But Jin said that Washington now had a “very positive” opinion on the bank.

China “does not regard itself as the big boss” in the lender, he added, and its shareholding would “definitely be diluted” as more members joined, which could ultimately lead to Beijing losing the de facto veto power it holds over some of its decisions.

In a speech Morneau suggested Canada was seeking to strike a balance between its close ally and neighbor the U.S., and the growing Asian giant.

China is Canada’s second-largest trading partner after the United States, with exchanges topping Can$85 billion last year. “We have important relationships with the world’s most powerful nations and have developed a capacity for mutual accommodation and governance,” Morneau said. “Should we become the first North American member of the AIIB, I have every confidence that we bring constructive and balanced views to the table.”

Joining the China-backed lender would create jobs and business opportunities for Canadians, he said, adding: “Participation in the bank is clearly in Canada’s best interest.”

Canada’s announcement came during Prime Minister Justin Trudeau’s visit to China, where he met Prime Minister Li Keqiang to try to strengthen ties before the G20 summit this weekend in Hangzhou.

The relationship has been strained recently by Chinese plans to impose new rules on canola imports, which could risk Can$2 billion a year of Canadian oilseed sales to the Asian giant. They were due to come into force on Thursday, but Premier Li said Wednesday that the existing rules would continue to apply while the two countries negotiate a long-term agreement.

In June China’s Foreign Minister Wang Yi berated a Canadian journalist while visiting Ottawa for questioning Beijing’s human rights record, saying her question was “full of prejudice and arrogance” and that she had “no right to speak.” The incident provoked a public outcry and led Canada to lodge a formal complaint with Beijing.

The 2014 detention on espionage charges of Canadian citizen Kevin Garratt, who had run a Christian-themed coffee shop near the North Korean border, has also raised tensions.

At the Great Hall of the People in Beijing on Wednesday, Trudeau said he had “highlighted” Garratt’s case in meetings with Chinese leaders but stressed that the goal of the visit was to establish a “strong, stable relationship and ongoing dialogue” with China.

Premier Li said judicial authorities would handle Garratt’s case “in strict accordance with the law” and that his right to consular visits would be upheld. He added it was essential for the two countries to “remove disturbances” and focus on the “overall interest” of Sino-Canadian relations.