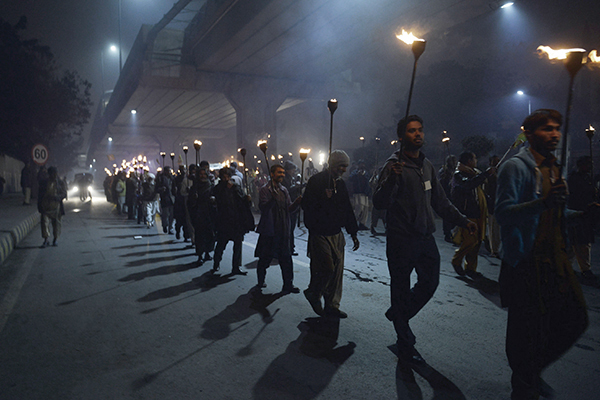 There’s a chance the blasphemy laws may be reformed.

In Nankana Sahib, the Pakistani city named after Sikhism’s founder, the courts have been zealously guarding the standard of violent, Islamist exclusionism.

It was here, in June 2009, that Aasia Noreen, a Christian farmhand, was convicted of “blasphemy.” And it was here, more recently, that 10 cable news channel owners and anchors were declared “proclaimed offenders” for failing to appear in court and defend themselves against “blasphemy” accusations—an event that bears the perverse promise of sparking some real discussion about the country’s blasphemy laws.

In November 2010, Aasia became the first Pakistani woman to be sentenced to death for “blasphemy.” Less than two months later, on Jan. 4, 2011, she became global news with the assassination of Gov. Salmaan Taseer, the man who had audaciously championed her cause, vigorously protested her innocence, and fearlessly urged for reforms to the controversial laws. He was killed for this selflessness.

Governor Taseer was buried on a foggy winter morning in Lahore. His assassination, and the shocking celebration of his killer from some of the most unexpected quarters, shrouded Pakistan in madness and fear. On March 2, 2011, his colleague Shahbaz Bhatti, a Catholic member of the federal cabinet, was also murdered in Islamabad. Despite right-of-center political leaders Imran Khan and Chaudhry Shujaat Hussain pleading that the blasphemy laws be rethought, by then any hope of doing so was gone.

Last year brought more grim news. In April came word that a mosque near Islamabad had been named after Governor Taseer’s killer, a man the courts just cannot bring themselves to execute. Worse, the killer’s apparent popularity had the builders flush with cash and ambitions to further expand this monument to our national shame. In May, lawyer Rashid Rehman was gunned down in Multan for defending a blasphemy-accused. In November, Nasim Shama and Sajjad Masih, a Christian couple accused of blasphemy over a wage dispute, were beaten mercilessly by a mob in Kasur and thrown alive into a burning kiln. She was five-months-pregnant. In October, the Lahore High Court upheld Aasia’s sentence.

But the fog may perhaps finally be lifting.

On Dec. 6, a Nankana district and sessions court found against the principals of five cable news channels—Abb Takk, ARY News, Dunya News, Express News, and Samaa TV—for airing, on July 4, “blasphemous” content not dissimilar to what ostensibly got Geo News in trouble.

On Nov. 25, an antiterrorism court in Gilgit-Baltistan had convicted Geo News mogul Mir Shakil-ur-Rahman, talk show host Shaista Lodhi, and actress Veena Malik and her husband, Asad Khattak. Each was fined Rs. 1.3 million, sentenced to 26 years imprisonment, and ordered to surrender their properties and passports. The antiterrorism court could not have missed the complainant’s credentials: the verdict, which came despite multiple apologies from the four, was the result of a “blasphemy” complaint filed by the lethally sectarian Ahl-e-Sunnat Wal Jamaat’s deputy chief, a man accused of several murders. A Pakistani court has suspended the Gilgit-Baltistan convictions, but that’s no guarantee the four can return to Pakistan, and survive.

For years, at great risk to their lives, the thinking and feeling have sounded the alarm about the sheer unjustness of the blasphemy laws, trying to get the “silent majority” of Pakistanis to come together in order to halt our collective, continuous unraveling. The latest case against the five news channels has gone largely unpublicized. If this changes, the unthinkable could become inevitable. It’s a fair bet that these media moguls, with their lives in the balance, will do everything in their power to reassess the damage done by Pakistan’s unholy laws and use their converted pulpits to rally, self-servingly, to the standard Governor Taseer died protecting.

At least one “blasphemy” event last year gave pause to the Islamists. On Dec. 2, Karachi police filed a case at the behest of the Sunni Tehreek against Junaid Jamshed, the Vital Signs heartthrob turned bushy evangelist. The provocation was Jamshed’s video rant about the “inferiority” of women in which he also suggested that the youngest wife of Islam’s Prophet was someone who made up stories for spousal attention. Facing outrage from the right and left, Jamshed issued a tearful video apology from abroad. It didn’t placate the Sunni Tehreek.

Others, however, have leapt to Jamshed’s corner—the first time a blasphemy-accused has been so visibly defended since Governor Taseer came to Aasia’s aid. “Everyone can commit such a mistake,” said Tablighi Jamaat’s Maulana Tariq Jameel. “These people have given it a sectarian color, made it into an issue of Muslim versus non-Muslim, which it is not. Issues like these will lead to my country’s ruin.”

These issues have already led to Pakistan’s ruin, as Governor Taseer had forewarned. But Jameel’s words are still a usefully honest reminder to us all, even at this late stage.

An earlier version of this piece appeared in Daily Times’ Jan. 4 edition marking the fourth anniversary of Governor Taseer’s assassination. From our Jan. 10-17, 2015, issue.

It is the utter failure of the government to properly investigate the suspects of blasphemy law. There is nothing wrong with the law as the law protects people of all faith from having their sentiments hurt by anyone as a way of blasphemy. The law should remain.

The law requires a re-visit on so many counts. It discriminates even between the prophets A.S. of Islam, something forbidden by the Quran. The unjust targetting of the Ahmadi sect with penalties that do not match “crimes” should be glaringly obvious to the most jaundiced of readers. The law is badly thought out and its implementation has been worse.

It is actually perverse that it was Junaid Jamshed’s accusation that made people realize that a crime cannot be committed without intent. This law (again against religious teaching) does not care about whether there is intent on the part of the accused, or not.