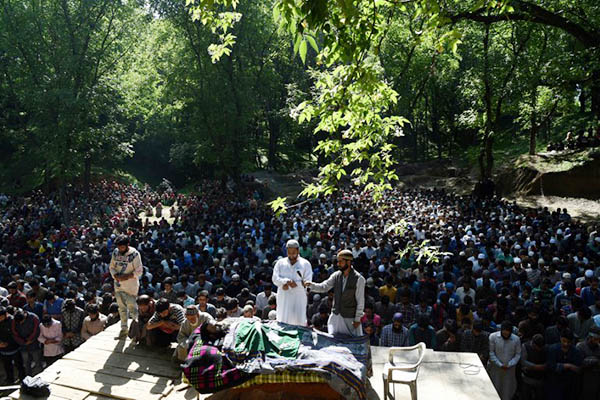 A civilian was killed after clashes broke out between protesters and government forces following the death of a top rebel commander in India-administered Kashmir, police said on Saturday.

Authorities imposed a curfew in many parts of the main Srinagar city as violence spread across the restive region after Sabzar Ahmad Bhat’s death on Saturday. Bhat, head of the Hizbul Mujahideen militant group, was killed in a gunfight with government forces in Tral area, some 40 kilometers south of Srinagar.

One of Bhat’s fighters was also killed in the gun battle, which erupted late Friday after government forces cordoned off a village following an intelligence tip-off.

Police said hundreds of villagers tried to break the cordon by throwing rocks at security forces. A police official, speaking on condition of anonymity, told AFP that the protester was killed after troops opened fire on the villagers. At least three other protesters sustained bullet injuries in the clashes.

The nearly 16-hour gunfight ended early Saturday when Bhat and his associate were killed. “Yes, both of them were gunned down and the operation is still going on,” police chief Shesh Pal Vaid told AFP.

Hizbul Mujahideen is the largest indigenous rebel group fighting against Indian-rule in the Himalayan territory since an armed rebellion broke-out in 1989. Bhat succeeded charismatic militant leader Burhan Wani after he was killed in a gunfight in July, which triggered months of anti-India protests in which nearly 100 people died.

Wani’s popularity grew after he extensively used social media to post pictures of himself and of other gun-wielding young militants in army fatigues to attract new recruits for the rebel group that has seen its ranks swell in recent years.

Anti-India sentiment runs deep in the predominantly Muslim Kashmir valley, one of the world’s most heavily militarized areas, where most people favor independence or a merger with Pakistan.

Kashmir has been divided between India and Pakistan since the end of British rule in 1947 but both claim the territory in its entirety.

Several armed rebel groups are fighting against Indian rule, with tens of thousands of people, most of them civilians, killed in the nearly three decades-old conflict.