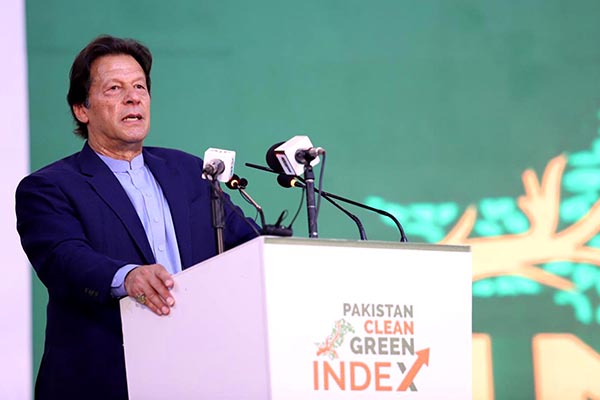 P.M. Khan says the competition is aimed at uniting all segments of society against threat of environmental degradation

Addressing a ceremony in Islamabad to inaugurate the competition between 19 cities of the Punjab and Khyber-Pakhtunkhwa provinces, Khan said it was time for every segment of society to unite against the threat of environmental degradation to ensure a future for Pakistan. “It was thanks to support from the common man that we planted one billion trees in Khyber-Pakhtunkhwa over five years,” he said, “Now we will make the entire country green with particular focus on the cities where specific areas will be identified for plantation.”

According to Khan, the government would gradually increase funds for the CGPI campaign, adding the provincial governments of Punjab and Khyber-Pakhtunkhwa would introduce an efficient local bodies system to empower people at the grassroots level. “Elected representatives at the village level will be made part of the regional competitions on environmental indicators,” he added.

During his speech, the prime minister likened pollution to a silent killer, and specifically slammed a lack of effort to protect the environment of Punjab capital Lahore as the reason behind an ongoing smog problem that endangers the health of every resident of the city.

Separately, Adviser to Prime Minister on Climate Change Malik Amin Aslam told the CGPI ceremony that the government was committed to making Pakistan a clean and green country. He said as part of the initiative, students from schools and universities would be engaged and urged the general public to help make this drive a success.

Aslam said the youth of country should register and participate in this drive and the government would recognize and reward those who actively participate.

Thank you so much Mr Prime Minister for giving priority to Environment sector in Pakistan . Tree plantation , sanitation and all allied issues are being taken up with a single hit under your guidance . We are all with you and pray for your long life .God bless you

I wish well for this Imran Khan initiative for clean and green Pakistan. Inshallah it will be a great success and the country will truly be transformed. Ameen.

An excellent initiative in the field of Environment by Prime Minister of Pakistan . Tree plantation is our urgent requirement to have the required 25% forest cover in any country and to fight against Climate change but Garbage management and Clean water are the basic services if provided to the community can bring tremendous improvement in public heath . We are all with you Mr Prime Minister and wish you a very successful completion of this program . God bless you

All the very best ❤️

We are really satisfied from PM of pakistan Mr Imran Khan. May Allah success u in this step.

A vital step taken which was supposed to be taken so early by the corrupt leaders . There should be competition between different cities among the provinces . Everyone will work enthusiastically .I want to apart of it . I live in one the beautiful cities of Kpk I.e nowshera .

Clean green pakistan project is the base of human life