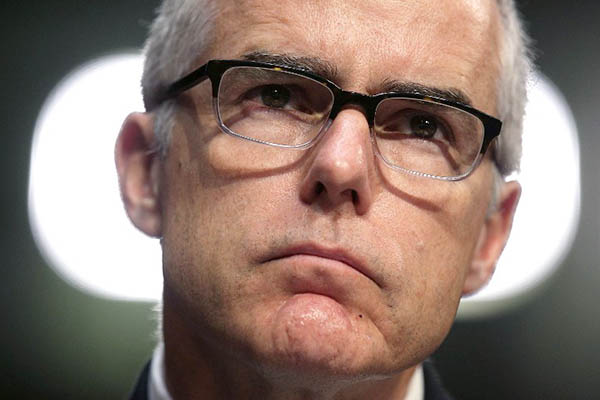 The acting chief of the FBI told the U.S. Congress on Thursday that President Donald Trump’s shock firing of James Comey will not derail the investigation into alleged Russian meddling in the 2016 election.

Trump dismissed the FBI director citing his handling of the probe into Hillary Clinton’s emails, but opponents suspect his ouster was a bid to stall the Russia investigation, which is also looking into possible collusion between the Kremlin and Trump’s team. “There has been no effort to impede our investigation to date,” acting FBI director Andrew McCabe told the Senate Intelligence Committee, in a hearing that capped two days of high drama provoked by the dismissal. “You cannot stop the men and women of the FBI from doing the right thing,” he said. “All of the agents involved in the investigation are still in their positions.”

McCabe meanwhile took issue with the White House’s claim that Comey had lost the support of the Federal Bureau of Investigation’s rank and file. “Director Comey enjoyed broad support within the FBI and still does today,” he told the committee. “I hold director Comey in the highest regard. I have the highest respect for his abilities and his integrity.”

“He was leading an active counterintelligence investigation into any links between the Trump campaign and the Russian government or its representatives, and whether there was any coordination between the campaign and Russia’s efforts to interfere in our election. For many people, including myself, it is hard to avoid the conclusion that the president’s decision to remove Director Comey was related to this investigation.”

McCabe gave no information on the status of the FBI probe, which dates back to July last year when the agency became aware of alleged Russian hacking of Democratic party computers and communications.

McCabe and five other top intelligence officials, including the heads of the Central Intelligence Agency and the National Security Agency, reiterated their January conclusion that the Russian government was behind the effort to manipulate last year’s election. Trump has repeatedly downplayed suspicions of Russian interference, and dismisses any notion of collusion with his team as “fake news.”

McCabe refused to respond to panel questions over Trump’s claim, made as he announced Comey’s firing, that the former FBI chief told him on three occasions he was not under investigation. “I can’t comment on any conversations the director may have had with the president,” McCabe said.

He meanwhile pledged not to discuss the Russia investigation with the White House, saying it had adequate resources to proceed. Unconfirmed media reports said that Comey in recent weeks sought more financial resources from the government to support the probe. “I can assure you we are covered,” McCabe told the panel when asked if the FBI needs more money for the investigation.