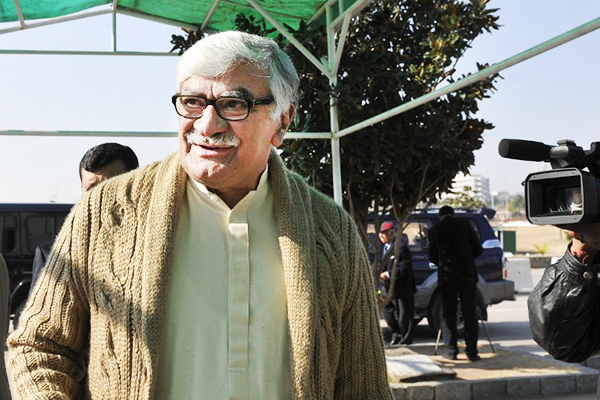 He’s lost 819 of his party colleagues to terrorism, and survived an assassination attempt in 2008. We recently spoke with Asfandyar Wali Khan, chief of the Taliban-threatened Awami National Party, which governed Khyber-Pakhtunkhwa province until March, about Saturday’s elections and more. Excerpts:

The ANP has been mercilessly attacked by the Taliban in the run-up to the elections. As a result your party has been unable to campaign freely. At any point, did you consider not participating in the May 11 polls?

In the last four years, our party has lost a total of 819 workers. Why are we being targeted? Simple: [the Pakistani Taliban] want to keep us out of the elections. For Pakistan these are not just any elections, the new Parliament will have to deal with 2014, when NATO and ISAF forces withdraw from the region. When 2014 comes around, they do not want liberal people to be in the government. These forces want a free hand to do whatever they want, but they will not keep us out. This is not just a war between ANP and the Taliban or Asfandyar Wali and [Taliban kingpin] Hakimullah Mehsud, this is a war between two mindsets. The liberal, progressive, and democratic are on one side. On the other end are those who ruled Afghanistan and later surfaced in Swat. If we back off now, we let them win. The more the elections are delayed, the more bloodshed there will be. It is not going to get any better.

How is your party campaigning?

We cannot run advertisements like the other parties. We just don’t have that kind of money. It is common knowledge how much these [cable news] channels charge for broadcasting ads. Our local workers move door to door. The day Haroon and Ghulam Ahmed Bilour were attacked in Peshawar [on April 16], we lost 17 workers. The very next day pamphlets were distributed in the city warning people not to hoist any flags of the ANP or display its posters and stickers. And the same evening in Peshawar, Nowshera, Charsadda, Swabi, and Mardan our party circulated thousands of stickers. The stickers had the party’s [electoral] symbol on it, which is the lantern, and a slogan, “Country or Coffin.”

Your partner parties the Muttahida Qaumi Movement and Pakistan Peoples Party have also been specifically targeted by the Taliban.

There is some misunderstanding. ANP has not gone into an electoral alliance with the MQM. PPP, MQM, and ANP have borne the brunt of terrorist attacks. We thought that if we got together to raise our voice against the bloodshed, the impact would be different. But let me clarify, again, that this is not an electoral alliance. It might not help the situation, but the three of us share an enemy. The people of Pakistan had been fooled for a very long time in believing that Karachi is the turf of the MQM and ANP. Now at least everyone knows the truth.

Is it accurate to say that the bloodshed in Karachi over the past five years is a result of turf wars among militias affiliated with the ANP, MQM, and PPP?

If I had a Pakhtun militant wing in Karachi, would I be targeted the way I am today? Please do not push us to the wall. That is my biggest fear. Do not push us to a situation where we decide to defend ourselves. The day we start defending ourselves, things are going to take a very ugly turn! If I had a militant wing in Karachi, I don’t think anyone would have had the guts to attack me.

‘The true referee of the electoral showdown is Hakimullah Mehsud.’

Let me make it very clear, ANP has been shoved into a wrestling ring with its hands tied. The opponents stand across from us and their hands are free. Until now, we were under the impression that the referee for these elections was the chief of the Election Commission of Pakistan, Fakhruddin G. Ebrahim. I have the utmost respect for him. But the true referee of the electoral showdown is Hakimullah Mehsud. Look at his statements, he’s “allowed” Jamiat Ulema-e-Islam (Fazl), Pakistan Muslim League (Nawaz), Jamaat-e-Islami, Pakistan Tehreek-e-Insaf to hold public rallies, and he’s not “permitted” ANP, MQM or PPP to do the same. Is this his decision to make? Mehsud has clearly defined his friends and his foes.

After the attack on Haroon Bilour, you wrote to the Election Commission demanding more security. What became of that?

Copies of the letter were also sent to the president, the caretaker prime minister, and to the chief justice. Nine days lapsed and nothing happened. There wasn’t a word from the ECP. On the 10th day, Ebrahim showed up on television claiming he never received any such letter. That is the last I heard of that. The Election Commission is telling us to make our own security arrangements. Use your own untrained security guards, they say. Now, if these untrained security guards are enough to guard me and my candidates, then they must be capable of also guarding the country? The government took my security away in a very awkward manner, at 9:30 p.m. one night, without even informing me. The security that had been provided to me consisted of one policeman and four guards. The Election Commission denies it ordered it, but then there is written evidence proving it requested all security be withdrawn.

Will you accept the election results without any hesitation?

No, that will depend. It will depend on the results and how things shape up. As far as electoral alliances are concerned, it is still too early to decide that. Let me repeat, since this is a war between two mindsets, I will not go for an alliance with a party which belongs to the other camp. Let’s not name anyone. However, I would like to add that of late there is a new phenomenon arising before the elections. A few days ago, two Jamaat-e-Islami workers were caught with 90,000 fake ballot papers. Now new reports are emerging—I am still trying to confirm them—that a Jamaat aspirant’s house was raided and another 30,000 to 35,000 bogus ballot papers have been recovered. If these things start developing then there will be a big question mark on the upcoming elections.

What should be the chief priority of the next elected government?

Terrorism needs to be addressed immediately. One has to take control of the field. Right now, the ownership of the field is being challenged. We can continue to fight among ourselves about what we may want to plant in the field, but first we must own it.