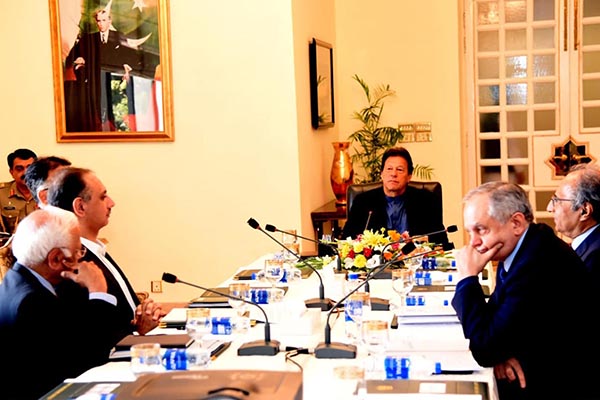 Prime Minister Imran Khan on Monday told a meeting of his government’s economic team that achieving economic stability and creating job opportunities for youth and skilled persons remained a top priority for his regime.

Khan told the meeting in Islamabad that the Pakistan Tehreek-e-Insaf-led government was committed to providing relief to the common man. Ensuring unhindered progress of development projects would not only accelerate the economy, he added, but would also create more jobs. He also directed the economic team to pay special attention to improving coordination between various ministries and departments and encouraging out-of-the-box ideas.

During the meeting, Federal Board of Revenue Chairman Shabbar Zaidi provided a detailed briefing on measures taken to refund taxes to exporters. Reviewing the steps, the prime minister directed the FBR to simplify refund payments so small and medium exporters can avail them without difficulty. He also reiterated his government’s claims that the country’s improving economic condition had restored the trust of the business community.

During the meeting, the FBR chairman also noted that export figures from July to November of this year had indicated an increase in export volume and its income in terms of dollars, which was praised by the prime minister as a positive indicator of economic stability. The meeting also learnt that 551 of 1,089 FBR cases that had pending before courts had been decided while 285 were currently being heard. Khan directed the Attorney General of Pakistan to expedite the resolution of these cases, and pledged all necessary resources to help the AG forward the government’s viewpoint before the court. Early resolution of all pending cases, said the prime minister, would help resolve the problems facing the business community.

Special Assistant on Petroleum Nadeem Babar, meanwhile, updated the meeting on progress in the construction of the Turkmenistan-Afghanistan-Pakistan-India gas pipeline.

Creating jobs for youngster is a big step of Imran Khan that’s why I like this person most. He think about future also he is very creative person.