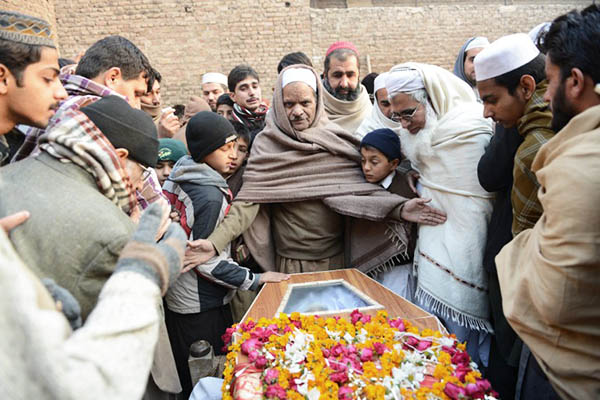 One vendor says demand for coffins is also increasing among people who have died peacefully at their homes.

Northwest Pakistan has been gripped by a raging Islamist insurgency for more than a decade, but a grim economic lifeline has emerged from the tragedy for some enterprising locals—a boom in coffin sales.

Coffins are not part of traditional Islamic death rites in Pakistan, where corpses are normally bound in a funeral shroud and laid upon a rope-cord bed at the time of burial. But when it comes to the mutilated victims of gun, suicide bomb and IED attacks, whose bodies are often in pieces, there is often little choice but to gather the remains in a box.

Jehanzeb Khan, a 60-year-old former hardware store owner in Peshawar, was a pioneer of the industry. “I used to sell two to three coffins in the early days of the business,” said Khan, who began making in coffins in the 1980s. Back then, his clients were mostly Afghan refugees from the Soviet invasion who needed coffins to take bodies back on long road journeys home, or ultra-religious families who wanted the corpses of their women to remain in purdah, away from the eyes of unrelated men.

But business began to pick up after a homegrown Islamist insurgency centered in the northwest began to take root in 2004 following the U.S. invasion of Afghanistan, with militants seeking shelter in Pakistan’s tribal areas. The Pakistani government says more than 50,000 people have since been killed in gun, bomb and suicide attacks, and Peshawar’s coffin-sellers are struggling to keep up with demand.

“People see coffins being used for dead bodies in hospitals after blasts, but now they’re buying them even for those who die peacefully at home,” said Khan.

Khan, who now has competition from around 40 other vendors in this city of 4.5 million, sells around 15 coffins a day. He aims to keep a reserve stock of 80 in case of major attacks, like last month’s Taliban massacre at the Army Public School, which killed 150 people, mostly children. Khan’s shop handled 60 orders after the attack.

Other vendors like 23-year-old Shehryar Khan cater more to the Army and paramilitary forces, for whom the trend has also caught on. “We make special coffins for the military. They demand good material, better wood and handles on the coffin,” said Khan, explaining that while an ordinary model costs $30, his deluxe units cost around $100. “Twice or three times a year we have to manufacture a very special coffin when a senior military officer dies. We use expensive cedar wood, good quality foam and velvet cloth for this piece, and sell it for around Rs. 35,000,” he added.

Islamic teachings stipulate that a burial must take place as soon as possible, normally by sunset the same day. As such, Shehryar Khan keeps staff on duty at all hours. “I sleep in the shop in night,” said his salesman Niaz Ali Shah. “The ambulance drivers know this, and whenever somebody needs a coffin they drive straight to our shop.”

Sporting a black beard and a round cap on his head, 31-year-old Shah has been working with Khan for four years and says he sees his job as a religious obligation. “We share others’ grief. They come to us crying. We sell them coffins and it reminds us that we also have to die. This life is temporary,” he said.

Jehanzeb Khan admits the business can take a depressing toll on those who profit from it. The horrific Taliban school assault left him “devastated,” he said. “There have been attacks in this city which broke my heart in the past, but this was much more terrible and worrying. They were all our own children, our young children.”

The Al Khidmat Trust, an Islamic charity that provides coffins to the poor and unknown victims of attacks, says not all of the vendors are as scrupulous. “There are businessmen who increase prices of coffins in emergencies whenever there is a big attack in the city,” said Khalid Waqas, the charity’s vice president. “Some people get unjustified profits, even in the most tragic of times.”