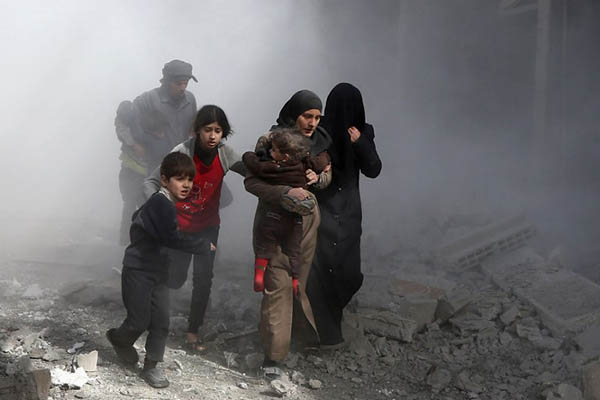 Syrian regime jets have pounded Eastern Ghouta, sending the death toll from a four-day assault on the rebel enclave on the outskirts of Damascus soaring past 220.

Violence also flared in eastern Syria on Thursday, where the U.S.-led coalition said it had killed at least 100 pro-regime fighters to fend off an attack on its Kurdish allies. The clash marked a fresh escalation between Washington, which has threatened the regime over its alleged use of chemical weapons, and Damascus, which labeled the latest incident in eastern Syria a “war crime.”

Moscow also slammed the U.S.-led strikes, with Russia’s U.N. ambassador Vassily Nebenzia saying he had lodged a protest about the assault during a closed-door Security Council meeting. “To confront those who really fight international terrorism on the ground in Syria is criminal,” he said.

The U.N. Security Council on Thursday failed to back a U.N. appeal for a month-long humanitarian ceasefire in Syria.

In Eastern Ghouta, which lies east of the capital and has been besieged since 2013, residents had no time to mourn their dead or treat their wounded from the previous day’s bombardment. “These are the worst four days that Eastern Ghouta has ever gone through,” said Hamza, an overwhelmed doctor at the Erbin clinic who was treating wounded patients. “From 2011 until now, there has never been the level of bombardment we’ve seen in the last 96 hours.”

The death toll mounted steadily throughout Thursday, with the Syrian Observatory for Human Rights giving 75 civilians dead by the evening. Three died of wounds suffered on Wednesday.

That brought to 228 the number of civilians killed since the regime launched a campaign on Monday of heavy air raids on the area, which has an estimated 400,000 residents. Among them were at least 58 children, the Observatory said.

“Children and teachers are terrified that at any moment they could be hit. The siege means there is nowhere for them to escape,” said Sonia Khush, Save the Children’s Syria response director. “There must be an immediate halt to the fighting and an end to the siege.”

Moayad al-Hafi, a rescue worker, said his team was targeted as they retrieved bodies near Erbin. “As we were pulling out the children and the dead from under the rubble, they targeted us with five rockets—directly targeting us,” said Hafi, 24.

At least two civilians were killed in retaliatory rebel mortar fire on government-controlled areas of Damascus, according to state news agency SANA. AFP correspondents said mortars were raining down on Bab Touma on Thursday night.

Eastern Ghouta was one of several so-called de-escalation zones agreed last year by three of the main outside players in the conflict—Turkey, Iran and Russia.

Ankara announced on Thursday it would host a new three-way summit to revive efforts to end the war, which has killed at least 340,000 people and displaced millions since 2011.

Recent attempts to bring the conflict’s protagonists and brokers to the table have floundered, but the U.N. made a fresh call this week for conflicting sides to halt fighting. The United States backed the plea but Russia—a longtime ally of Syria’s government—shrugged it off.

“That is not realistic,” Russian Ambassador Vassily Nebenzia told reporters at the U.N.

A U.S. military official said the U.S.-led coalition that still assists Kurdish-led forces in the hunt for surviving I.S. members in eastern Syria killed at least 100 pro-regime fighters overnight. U.S. Defense Secretary Jim Mattis said the coalition acted in self-defense after pro-government forces moved on an area under the control of the Kurdish-led Syrian Democratic Forces.

The pro-Damascus forces “began shelling it with artillery,” he added. “They were moving with tanks, obviously in the same direction as they were firing. At the end of our effort to defend ourselves, their artillery was knocked out, two of their tanks were knocked out, they had casualties.”

Syrian state media confirmed dozens were killed but appeared to deny the forces were army soldiers, describing them as “popular forces.”

Wounded fighters were taken to the military hospital in Syria’s eastern Deir Ezzor city, which is controlled by the government.

A reporter contributing to AFP saw at least six fighters there, lying on hospital beds in sparsely equipped rooms. The Observatory said the regime forces might have been aiming to capture a key oil field and a major gas plant in an SDF-held area.

The Omar oil field, one of the biggest in Syria, had a pre-war output of 30,000 barrels per day, while the Conoco gas field had a pre-war capacity of 13 million cubic meters a day.

According to the Observatory, the forces that launched the attack on SDF positions were local tribal fighters loyal to President Bashar al-Assad and Afghan Shia militia fighting alongside the regime.

In a letter addressed to the U.N. secretary general, the Syrian foreign ministry said the attack “represents a war crime and a crime against humanity.”