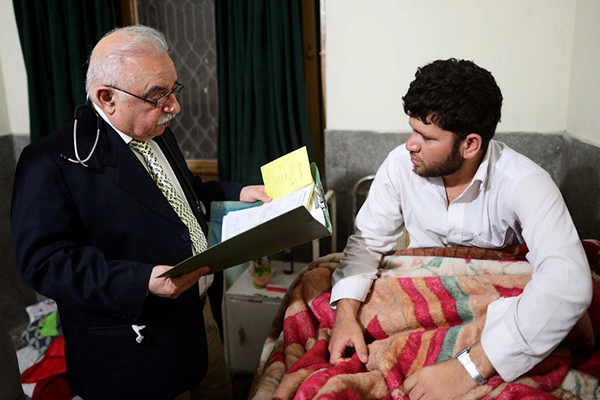 Dr. Hussain with a patient at his clinic in Peshawar, April 5. A. Majeed—AFP

The long war in Pakistan’s northwest is taking a toll on the mental health of its besieged residents.

After nine friends and relatives were killed in a U.S. drone strike four years ago, Mohammed Fahim took tranquillizers to blot out the nightmares. The 19-year-old is one of a growing number of Pakistanis living in the tribal areas on the Afghan border who has suffered from conditions related to depression, anxiety, and mental health problems because of war.

U.S. drone strikes, fighting between Pakistani Taliban and the Army, mass displacement, chronic unemployment and disillusionment are all causing suffering—physical and psychological—on an unprecedented scale in northwest Pakistan, say psychiatrists.

Fahim lost an eye in the January 2009 attack, but the mental scarring has been even more traumatic. The flashbacks are still sudden and powerful. “I feel like my head is exploding,” he says when he remembers how four uncles, a cousin, and four neighbors died when they came round for tea to his house in North Waziristan, the most notorious of Pakistan’s Taliban and Al Qaeda bastions. “We heard the sound of a missile. A fraction of a second later, they were all dead, their bodies mutilated,” says Fahim, who happened to be in the other room when the missile struck. He insists that no one in his family was associated with the Islamist militancy.

U.S. officials say the covert drone war in Pakistan involves surgical, pinpointed strikes against known killers that cause few if any civilian casualties. The London-based Bureau of Investigative Journalism has compiled press reports that indicate U.S. drone strikes have killed up to 3,581 people in Pakistan, including as many as 884 civilians and 197 children since 2004.

“Depression is really high in Waziristan,” says Dr. Mukhtar-ul-Haq, head of the psychiatry department at the government-run Lady Reading Hospital in Peshawar. “There is uncertainty generally in Pakistan, but particularly in this area. They are always apprehensive about the drones, about their life.” While drone attacks do bring patients “episodically” for treatment, says Dr. Haq, residents in Waziristan complain of living in constant fear of drones that patrol in the skies above and the buzzing sound they say they emit. He says his worst case was a man who became so aggressive and paranoid that he had to be hospitalized. “He had no predisposition to psychiatric illness.”

“The sound alone gives us psychological grief,” says Kaleemullah Mehsud, a man in his 30s from Waziristan, who is one of Dr. Haq’s patients. Mehsud found a SIM card out on the family’s farmland one morning. Popular belief has it that SIM cards emit signals, guiding the drones to attack. After about four hours, Mehsud developed “full-blown” psychotic delusions.

There are no statistics about the rise in psychological illness, but Mian Iftikhar Hussain, a psychiatrist with a private clinic in Peshawar, believes cases have increased threefold in recent years. “There are multiple problems: the Afghan war and its spillover into Pakistan, migration, violence, kidnapping, poverty, unemployment,” he says. The most common conditions are anxiety, depression, a mixture of the two, then psychosis, schizophrenia, and cannabis-induced psychosis. “Even soldiers come with somatic symptoms, with severe anxiety; these are related with the difficulty in coping with the stress going to the warfront.”

The waiting room of Dr. Hussain’s clinic is packed with patients from the tribal belt, bearded men with a haggard look, women weeping into their burqas. A mother of nine tells the doctor about the death of her relatives. A young man, hallucinating, shows the burns he has inflicted on his own arms. Consultations last around 10 minutes. Most patients are sent away with prescriptions, the more serious cases are referred for electroconvulsive therapy.

In Pakistan, mental health problems have long been a stigma, but while that may be slowly changing, demand outstrips supply. Health services range from the basic to the abysmal. Many people are more focused on survival—on food, water, and shelter. Taking time and money out to treat depression is beyond the means of millions. “Health and education are the lowest priorities on the government agenda, and mental health is at the bottom,” says Dr. Hussain.

According to the national association of psychiatrists, there is one psychiatrist for every 333,000 people in this 180-million-strong country. “The people we receive here is just the tip of the iceberg,” says Dr. Haq. “If we have two patients, multiply that by 100. Nobody knows that they are having these problems,” he adds.

The few specialists lack time and resources. If they don’t know when they will see their patients again, they send them off with prescriptions for six months, sometimes longer. There is a growing demand for locally-made tranquillizers and antidepressants—cheap copies of expensive drugs manufactured in the West. Behind the counter of his Peshawar pharmacy, Abdullah has the ideal medication: a box of 30 anxiety-inhibiting pills for $2. “Before we didn’t have these types of products, I didn’t even know they existed,” he says. “But for several years, we’ve been selling loads of them.”

Well that’s why the world says no terrorism Pakistan. Now that get it stop exporting terror to Afghanistan for ‘Strategic Depth’ and to India for Kashmir.