Home Latest News Despite Nobel, Malala Still Hated by Many at Home

Despite Nobel, Malala Still Hated by Many at Home 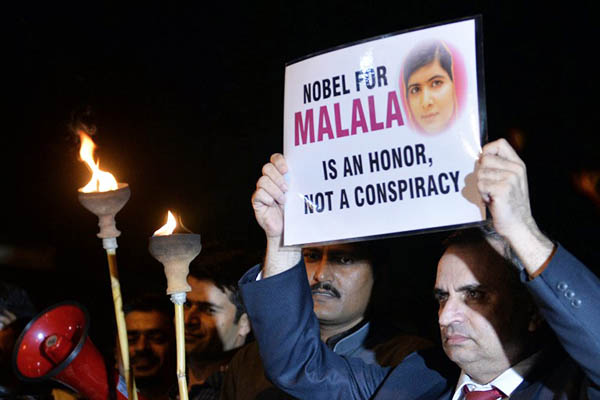 Teenage activist faces criticism by Pakistanis who accuse her of defaming country abroad.

Malala Yousafzai may have won the Nobel Peace Prize, but she remains an object of hate for many Pakistanis who view her as a Western agent on a mission to shame her country.

Shot in the head by Taliban insurgents two years ago after she spoke out against them for opposing girls’ education, it comes as little surprise that hardline Islamists continue to revile the 17-year-old. More difficult for her supporters to comprehend is the outpouring of invective from many in Pakistan’s middle classes, who may be keen to educate their daughters but who object to airing the country’s problems abroad.

“#MalalaYousafzai should b awarded Oscar Award instead of Nobel Prize,” tweeted user Adnan Karim Rana, a common refrain among detractors who believe her shooting, hospitalization and coma were all staged as part of a conspiracy that involved Britain where she now lives. Other social media users regularly post sexualized insults.

Inquilab Khan, a 45-year-old pharmacy owner in Peshawar said he did not understand why Malala had been awarded the Nobel prize. “Through Malala they want to malign the image of Pakistan and Islam and they were in search of a figure from this region with a Muslim name, so that they could use her against us,” Khan said. Bookshops in the city continue to refuse to stock her autobiography, I am Malala, after receiving threats from the Taliban and being warned by police against selling the book.

Yousafzai is the country’s second-ever Nobel laureate after Abdus Salaam, who won the physics prize in 1979 but was widely shunned for being a member of the persecuted Ahmadi minority. She has been widely praised by some sections of the public and by politicians including Prime Minister Nawaz Sharif, who called her the “pride of Pakistan.” She was also hailed in her hometown of Mingora in the Swat Valley. Even in Peshawar, some 200 people gathered last week to celebrate the award by distributing sweets and dancing.

The hatred toward her stems partly from religious conservatism and opposition to female empowerment, but it also taps into skepticism toward a decade-long fight against militants which many Pakistanis regard as being imposed on them by the United States. “It’s about what she’s come to embody—the idea that militancy and the war on Taliban is an externally imposed war on Pakistan. It chimes with an American agenda and all things American are deserving of acute suspicion,” said Cyril Almeida, a columnist. “The fact she is being feted globally and in the very capitals of countries regarded by conspiracy-minded people as hostile to Pakistan and Muslims—that is seen as evidence there must be something going on,” he added.

Her critics on social media—many of whom support right-of-center opposition leader Imran Khan and who include women—have posted pictures of Pakistani girls going to school to “prove” that Yousafzai was lying about the Taliban’s campaign to raze hundreds of schools.

A new Facebook page called “Malala Haters” depicts the teenager with fangs, juxtaposing her image alongside alleged child victims of U.S. drones. The aim is to suggest that while she is glorified, the stories of victims of Western violence remain untold. Others question how much she has achieved so far and maintain that octogenarian Pakistani philanthropist Abdul Sattar Edhi was more deserving of the prize.

Supporters fear Yousafzai could be forced to remain in exile like fellow laureate Salaam, who left the country after Ahmadis were declared non-Muslims. Despite his groundbreaking work in subatomic physics, including predicting the existence of the so-called “God particle” later known as the Higgs boson, Salam’s achievements have been expunged from official records and his grave lies desecrated.