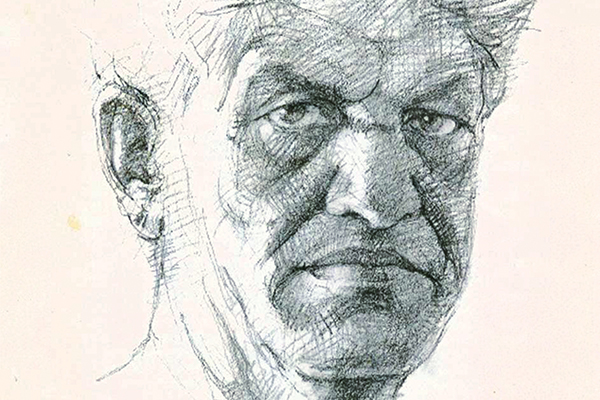 No matter what they say, take that leap of faith.

My life has, for almost 50 years now, been devoted to my work. I started drawing at a very young age. My father, who practiced calligraphy, guided me along the way. Growing up in Quetta, I learned whatever I could about painting from billboard artists. I would then practice their different techniques. I sketched Jinnah in the 7th grade. It didn’t quite look like him, and my father scolded me for disrespecting the revered man. Much later, in 1970, I showed a fresh portrait of Jinnah to my father. He welled up. That is when I knew I had made it as an artist.

People discouraged me from taking up art professionally. ‘It takes a lot of work, and who knows when or if you’ll ever even make it big.’ So, in 1960, I began search for a more stable line of work. I interviewed in Karachi for a clerk position in a government office. ‘Can you write in shorthand?’ I said, no. ‘Are you good at the typewriter?” I said, no. ‘What can you do then?’ I can paint, I told myself, and walked out of the interview. Painting and drawing is all I ever wanted to do. This job interview pushed me to embrace my desire and take a leap of faith. I enrolled at the National College of Arts, Lahore. Today, I cannot imagine myself in any other profession. I am certainly not a clerk. Had I not been an artist, I would be nobody.

The NCA of the 1960s was a magical place. We were blessed to work with gifted teachers, like Principal Shakir Ali, who were sincerely interested in helping us learn. The students, too, were all passionate, and competitive. My teachers never discovered my secret: I am colorblind. They did not see fault in my work on this account. But I was found out by my college friends because I just could not identify the red queen on the carrom board. To my relief, they simply marveled at the fact that my colorblindness was not apparent in my work. But I felt I had to compensate for this, so I worked doubly hard to understand art theory, which continues to benefit my work.

I owe my success to God’s grace, hard work, and the refusal to allow other people to decide what may be best for you. In everything I do, I pay close attention to every small detail. When I paint, I do not stop until I have fallen completely in love with what I have produced. Everything has to be perfect. Beauty is best displayed in expressions. While doing portraits, I talk to the sitters to get a sense of who they truly are and I try to capture an expression of their sense of self. Many of my colleagues turned commercial and, I feel, killed the artist within them. I never gave up on cutting my own course, even when times were rough. I have been devoted to earning my own name and my own identity on my own terms. I am inspired by great artists. But I do not like comparisons. I am who I am. I am Saeed Akhtar.

1960
Resolves to pursue art after a job interview

1964
Graduates from the NCA, joins the faculty

1994
Receives the Pride of Performance award from the state

1998
Retires from the NCA, sets up teaching studio