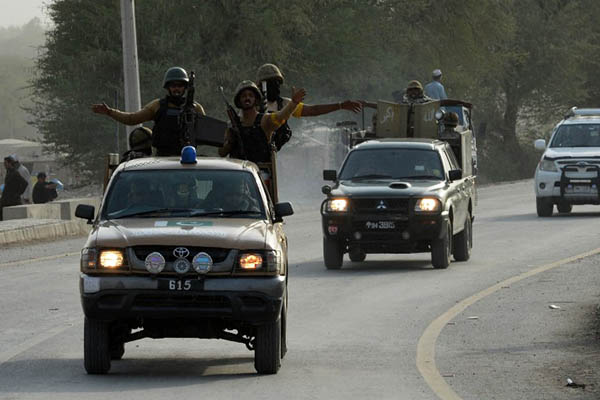 Officials say the driver is an Air Force commander who was traveling with his family.

Pakistani authorities on Sunday detained a man on suspicion of attempting to ram Prime Minister Nawaz Sharif’s car as it was traveling in a security convoy, officials said.

The man was detained and his vehicle impounded after he tried to get closer to Sharif’s car as the prime minister was returning to Islamabad with his family from Murree.

“An unknown vehicle came closer to Prime Minister’s car after crossing other vehicles of the Prime Minister’s convoy when he was returning to Islamabad,” a senior government official told AFP on the condition of anonymity because he is not authorized to talk to media. “The security vehicles escorting the Prime Minister blocked the way of the suspicious vehicle and other cars in the convoy narrowly escaped an accident due to the breach of security,” the official said. “The Prime Minister and his family are completely safe,” he added.

Another government official told AFP the man claimed to be a retired air commodore from the Pakistan Air Force and was traveling with his own family in a white land cruiser. “He is in custody of the Prime Minister’s security team and his vehicle has also been impounded,” he said.

The official said that the incident took place a few kilometers outside Islamabad.

Prime Minister Sharif’s spokesman confirmed that a suspicious vehicle had tried to pass the high-profile convoy and said that the incident was being investigated.

“The concerned officials are interrogating the man. What I can confirm at this moment is that a suspicious vehicle tried to cross the Prime Minister’s convoy by breaching the security,” Naeem Khan told AFP.

This was poor guy was trying to wake up his Majesty and his wife (Grand Daughter of BHOLU PEHLVAN) who probably were dosed off after having hang over from NULLI NIHARI and few shots of home madeLASSI.