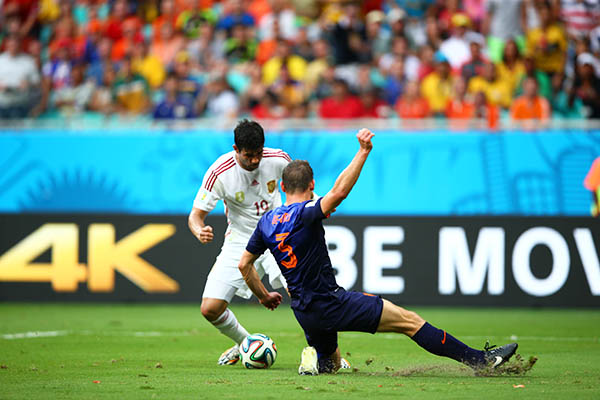 Spain’s 5-1 loss to the Netherlands doesn’t have to mean the end of tiki-taka.

Spain’s first match in the 2014 FIFA World Cup started rather well. Xabi Alonso scored a penalty at the 26-minute mark, bringing his team’s score to 1-0 against Holland. He and his fellow players knew the significance of scoring first for the Spanish. A familiar score-line now presented itself with little or no threat from the opposition. Everything was going according to plan. Then disaster struck. Gerard Pique decided to track midfielder Arjen Robben as Sergio Ramos decided to maintain the offside trap—whichever way you look at it, the miscommunication between the pair presented Dutch coach Danny Blind a chance to let captain Robin van Persie loose. Cue Spanish implosion and Dutch exploitation.

Setting out with a 5-3-2 formation is usually seen as a sign of containment, and that is because it usually is. The formation allows you to alter the space of the playing field, because you can narrow it in the defensive phase and widen it when the opportunity to attack arises. This alteration is done through the wing-backs, who can either tuck in and perform ancillary center-back functions or move out and become wide midfielders. Daley Blind on the left side provided two assists while Daryl Janmaat on the right made sure that Spaniard Andres Iniesta’s diminutive physical stature mirrored his impact on the field. The extra center back in the middle of the defensive line of the 5-3-2 formation is also designed to help in doubling up with either the wing-backs or the defensive midfielders to regain possession quickly in the midfield. It was here that the experience of Dutch Ron Vlaar played a crucial role. His chaperoning of the people to either side of him—the youthfully exuberant Bruno Martins Indi and Stefan De Vrij—helped the three in the center of the formation’s ‘5’ maintain their discipline even after conceding the first goal through a dubious penalty.

With Wesley Snejider playing almost as a regista (deep-playing playmaker) rather than his stated position as a trequartista, and Jonathan de Guzman and Nigel de Jong keeping further behind him, the plan was always to feed the front duo of Robben and Van Persie as quickly as possible. Due to the field already being narrow in Spain’s offensive phase, the Spaniards made another mistake by pushing extra men through the center of the field, with Sergio Busquets and Alonso both trying to help the advanced midfielders and Diego Costa. This move left space in the front to exploit for the two Dutch on point. This clearly worked as three of the five goals conceded by Spain came through long ball assists. The tactics worked as an antithesis to what the La Roja preach, but with future matches coming up against Chile and Australia, where the emphasis will be on the Dutch to attack, you can count on Netherlands coach Louis van Gaal to either switch to the attacking 3-4-1-2 or a straightforward 4-3-3 formation (which he has preferred in the past).

The dismantling of the La Roja by the Dutch, being as one-sided as a game has ever been between two major European teams in the World Cup, still does not signify an end for the ‘pure’ football of tiki-taka. This is primarily because even when Spain was in possession, it was not playing its usual style of close passing and furious pressing. The hybridization of Spain’s footballing philosophy is an ongoing process, made most obvious by the inclusion of Costa. While his presence—and his inimitable, aggressive style of play—was being touted as the quintessential ‘Plan B’ for Spain, what it actually meant was that the Spanish were caught between mindsets; they weren’t playing the way the team was used to, nor were they delivering on the style of play they had been forced to adopt. Spanish manager Vicente del Bosque also made some, in hindsight, obvious mistakes in choosing to stick to this style of play even after Spain was trailing 3-1 at the 64-minute mark. A reversal of tactics at that point might have helped, but it was always going to be unlikely for Spain to stage a comeback.

The Spanish, after losing the mental initiative, lacked the confidence that has always been an integral part of their wearing down opponents before (figuratively) kicking them around. With every lapse of concentration being followed by a further loss in confidence—and vice versa—reliable stalwarts routinely made unfortunate and tragic individual errors. Perhaps the team needed retired footballer Carles Puyol on defense, because the lack of chemistry between Ramos and Pique allowed the Netherlands to employ the simplest solution and play straight through the middle of the field. It is probably best to chalk these errors off to a generally very bad night for the Spanish, but with matches against less formidable opposition coming up, Del Bosque has to make a decision. Should he continue to test his new system or return to the tried and tested formula? With the ageing but still reliable David Villa still available for selection, the dilemma is obvious. Is it time to bring back tiki-taka?