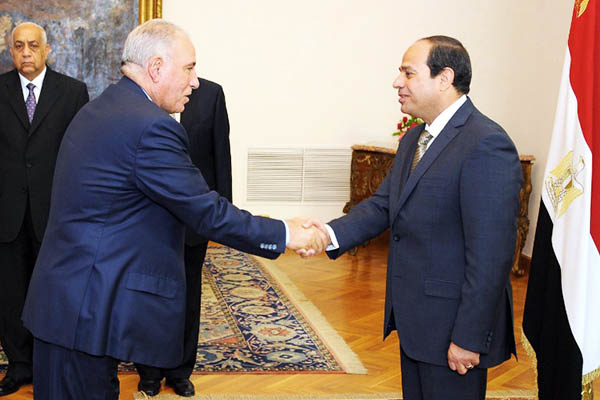 Justice minister removed from post after claiming he would even imprison a prophet if they were found guilty of wrongdoing.

Egypt Prime Minister Sharif Ismail sacked Sunday the justice minister after he said on television that he would arrest even “a prophet,” in remarks that sparked outrage in the country.

“Prime Minister Sharif Ismail decided to dismiss justice minister Ahmed al-Zind from his post,” a statement from the premier’s office said, but without giving the reason for the decision.

Zind sparked outrage on social media over the weekend and a warning from Cairo-based Sunni Islam learning center Al-Azhar after an interview he gave to private satellite channel Sada al-Balad on Friday. Asked about a case involving journalists accused of defaming him and whether he would jail them, Zind said he would imprison anyone.

“Even if it’s a prophet, God’s peace and blessings be upon him,” Zind said, using the Islamic saying of reverence spoken by Muslims only when referring to Islam’s Prophet. Upon realizing what he had said, Zind immediately stopped and said: “I ask for forgiveness from God.” He further said any “wrongdoer, whatever his identity—even judges” would be jailed if found guilty.

Angry Egyptians launched the Twitter hashtag “trial for Zind” as they lashed out at the minister. “At least he should be sacked and then put on trial. This issue is not a joke,” said one tweet. “God will take revenge,” said another.

Zind is the second justice minister to be dismissed in less than a year for controversial comments. In January he angered human rights when he called for the “mass killing” of outlawed Muslim Brotherhood supporters.

His latest comment drew a stern warning from Al-Azhar against insulting Islam’s Prophet. “All those involved in public discourse and in the media must respect the name of [Islam’s] Prophet. He should not be subjected to any insult even if it’s unintentional,” it said in a statement without naming Zind.

Zind had clarified his comments in a telephone interview Saturday with private network CBC television, saying they were a mere “slip of the tongue.” They were “meant in a hypothetical sense … but the Muslim Brotherhood supporters seized on them.”

In January, Zind said in an interview with the same Sada al-Balad television that he “would not be satisfied until 10,000 Brotherhood members were killed for every martyr” from the armed forces and the police. Human Rights Watch said his remarks encouraged the “slaughter” of political opponents.

Egyptian authorities have cracked down on the Muslim Brotherhood movement after the army ousted Islamist president Mohamed Morsi in 2013. Hundreds of Brotherhood supporters have been killed and thousands more jailed in the crackdown, while several of its leaders including Morsi have been sentenced to death or lengthy jail terms.

Zind, described by legal experts as “elitist,” was known for his animosity toward Islamists and the 2011 uprising that ousted ex-president Hosni Mubarak. Under Mubarak, he openly supported him and opposed a judges’ movement that called for judicial independence and reform.

Zind had taken over from Mahfouz Saber, who too was replaced after saying that becoming a judge was too lofty an ambition for the sons of cleaners.