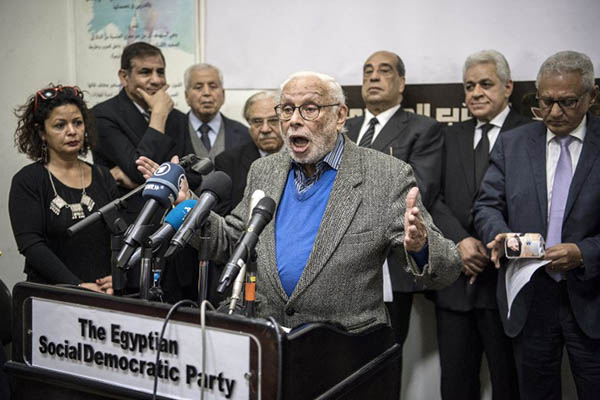 A coalition of opposition groups reiterates its rejection of the planned “unconstitutional” amendments. Khaled Desouki—AFP

Amr Waked and Khaled Abol Naga joined a congressional briefing on Monday in Washington about the human rights situation in Egypt as well as the possible extension of Sisi’s tenure.

In a statement, the union accused Waked and Abol Naga of “betraying the nation” and pushing “the agenda of conspirators against Egypt’s security and stability.”

“Both actors will no longer be allowed to act in Egypt,” the union’s head, Ashraf Zaki, told AFP. “The decision prohibits anyone from assigning them to any acting jobs.”

Both men accused the union of playing a “political” role on their official Twitter accounts.

The award-winning actors live abroad and have featured in a wide range of Egyptian as well as international movies and TV series. Earlier this month, Waked said he faced difficulties renewing his passport at the Egyptian consulate in Madrid.

Egypt’s parliament, which is dominated by Sisi supporters, gave the preliminary go-ahead last month to constitutional amendments that would allow the president to stay in power after his second term ends in 2022.

Speaker Ali Abdel-Aal said this week that a draft is expected to be ready by mid-April after which it will be put to a public referendum, according to local media. A coalition of opposition groups on Wednesday reiterated its rejection of the planned amendments, which it criticized as “unconstitutional.”

Sisi, a former army chief, led the military’s overthrow of Mohamed Morsi in 2013 following mass protests against the Islamist leader’s rule. He won his first term as president the following year and was re-elected in March 2018 with over 97 percent of the vote.

His government has been criticized for quashing serious opposition and curtailing freedoms gained following a 2011 uprising that toppled longtime autocrat Hosni Mubarak.

The authorities have in recent years launched a broad crackdown on dissent targeting Islamists as well as liberal and secular activists. Novelists, singers, actors and popular social media bloggers have also been swept up in the crackdown.

Last week, Egypt’s musicians union said it suspended singer Sherine Abdel-Wahab pending an investigation into her joke about a lack of free speech in the country. Prominent novelist Alaa al-Aswany also said he was accused of insulting Sisi, the armed forces and judicial institutions.