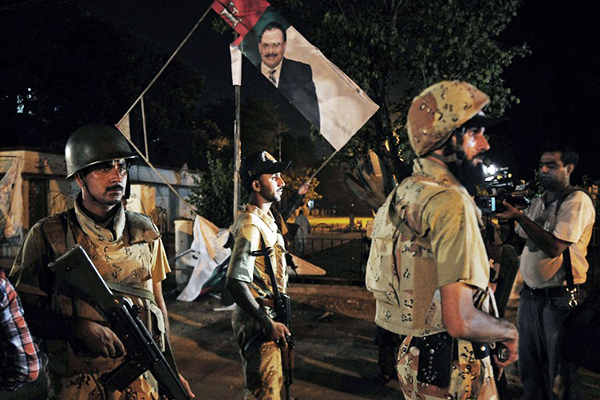 According to one tally: at least 66 people have been killed so far in elections-related attacks.

Three people were killed and 35 others wounded in twin bomb blasts near an office of the Muttahida Qaumi Movement party in Karachi on late Saturday.

The two explosions happened within 20 minutes of each other in the neighborhood of Azizabad, said senior police official Saleem Akhtar Siddiqui. No MQM workers were identified among the dead and wounded, he said. Suresh Kumar, secretary of Sindh’s health department, said: “We can confirm that three people have died in the twin blasts while 35 have been wounded. The wounded have been admitted to different hospitals.”

Qamar Mansoor, an MQM spokesman, said a rally had been planned in the area hit by the Saturday blasts, but would now be postponed and a day of mourning observed instead.

Campaigning has been marred by Taliban threats and attacks, which have killed 66 people since April 11, according to a tally by AFP.

Earlier on Saturday, a candidate running for Parliament was injured when his vehicle hit a roadside bomb in the troubled northwest, officials said. In a separate incident, an election office of the cricketer-turned-politician Imran Khan’s Pakistan Tehreek-e-Insaf party was attacked in Peshawar.

On Friday, National Assembly candidate Sadiq Zaman Khattak was shot dead along with his 3-year-old son after praying in a Karachi mosque. Khattak was a businessman and a candidate from the Awami National Party.