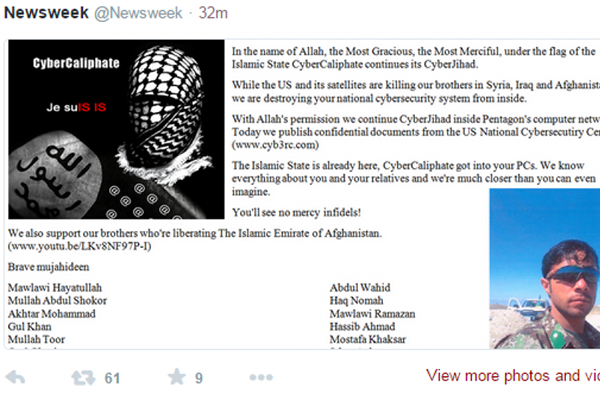 The magazine’s Twitter feed was taken over by pro-Islamic State hackers for 14 minutes.

The FBI is investigating the hijacking of Newsweek’s Twitter feed Tuesday by pro-Islamic State hackers in which a threat was made to President Barack Obama’s family, the White House said.

White House spokesman Josh Earnest told reporters that “this particular intrusion is one that is already being investigated by the FBI,” without elaborating.

Newsweek said the Twitter feed was taken over for 14 minutes before the news organization was able to regain control. During that time, the account showed a picture of a hooded figure and the words “Cyber Caliphate” along with the message “Je Suis I.S.,” a response to the “Je Suis Charlie” messages following the deadly attacks at French weekly Charlie Hebdo.

The unauthorized tweets were removed, but images shown on some media showed they included threats against First Lady Michelle Obama and messages praising “cyber jihad.” One of the messages addressed at the first lady said the Islamists were “watching you, your girls and your husband.”

Another message said: “While the U.S. and its satellites are killing our brothers in Syria, Iraq and Afghanistan, we are destroying your national cybersecurity system from inside.”

Newsweek managing editor Kira Bindrim issued a statement apologizing “for anything offensive that might have been sent from our account” and indicated that the magazine was “working to strengthen our newsroom security measures going forward.”

In January, the hacked Centcom Twitter feed posted what appeared to be an office phone directory of officers that was slightly out of date. The move came the same day the U.S. administration announced the launch of a new cyber intelligence center which aims to integrate information about threats to critical computer networks.

Other major media organizations have had social media accounts compromised including the BBC, Associated Press and Agence France-Presse.