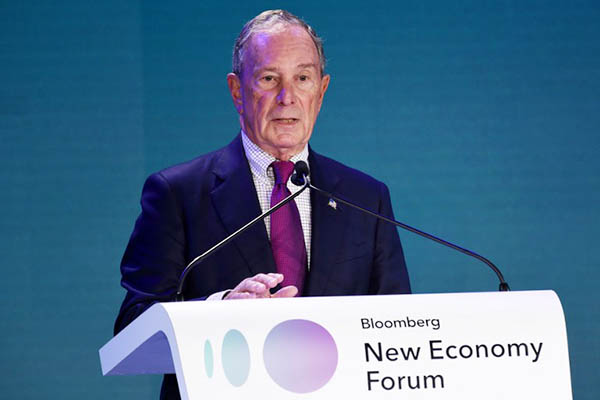 Former New York mayor Michael Bloomberg said on Sunday he’s giving $1.8 billion for financial aid at Johns Hopkins University, believed to be the largest ever donation to a post-secondary institution.

Bloomberg said he was making the gift to help qualified low- and middle-income students more easily afford access to university in a country where post-secondary education fees at elite schools often exceed $50,000 a year, a prohibitive barrier for most families.

“I was lucky: My father was a bookkeeper who never made more than $6,000 a year. But I was able to afford Johns Hopkins University through a National Defense student loan, and by holding down a job on campus,” Bloomberg wrote in a New York Times op-ed. “My Hopkins diploma opened up doors that otherwise would have been closed, and allowed me to live the American dream.”

Bloomberg, who made his first donation to Hopkins the year after he graduated—just $5—has since already provided $1.5 billion for research, teaching and financial aid. The new donation will come on top of that, and serve as financial aid for qualified students from lower family income levels.

“I want to be sure that the school that gave me a chance will be able to permanently open that same door of opportunity for others,” Bloomberg wrote. “This will make admissions at Hopkins forever need-blind; finances will never again factor into decisions. The school will be able to offer more generous levels of financial aid, replacing loans for many students with scholarship grants.”

“It will ease the burden of debt for many graduates. And it will make the campus more socioeconomically diverse.”

He did, however, acknowledge that his donation was only helping one school in a country where more students come from the top one percent of earners than from the bottom 60 percent of the income scale at dozens of elite colleges. And that’s despite the fact that many lower-income students have the qualifications to be accepted, Bloomberg stressed.

“These steps alone are not sufficient. Federal grants have not kept pace with rising costs, and states have slashed student aid. Private donations cannot and should not make up for the lack of government support,” he added. “Together, the federal and state governments should make a new commitment to improving access to college and reducing the often prohibitive burdens debt places on so many students and families.”

“There may be no better investment that we can make in the future of the American dream—and the promise of equal opportunity for all.”